AT&T Stadium is the current domed-stadium for the Dallas Cowboys. It was opened on May 22, 2009 costing $1.2 billion. It is also used for concerts and other events. It was known as Cowboys Stadium from 2009 until 2013.

On July 25, 2013, it was announced that the Cowboys had agreed to grant naming rights to AT&T, changing the name of Cowboys Stadium to AT&T Stadium. 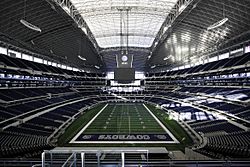 The inside of AT&T Stadium

AT&T Stadium is currently the world's largest covered stadium with 80,00 seats. A pair of nearly 300 ft (91 m)-tall arches spans the length of the stadium dome, anchored to the ground at each end. The new stadium also includes "more than 3,000 Sony LCD TV's throughout the luxury suites, concourses, concession areas and more, offering fans viewing options that extend beyond the action on the field," and a center-hung video board that is the largest high-definition television screen in the world. Glass doors, allowing each end zone to be opened, were designed and built. 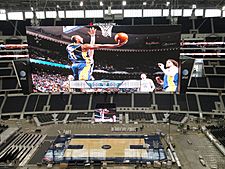 Basketball being setup at AT&T Stadium

Besides having the Cowboys play there, AT&T Stadium has hosted the following sports events: