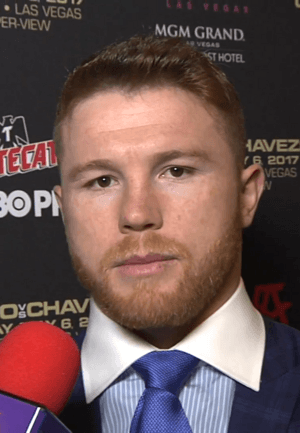 Santos Saúl Álvarez Barragán (born 18 July 1990), better known as Saúl "Canelo" Álvarez, is a Mexican professional boxer. Since December 2018, he has been the middleweight world champion of the IBO, WBA and WBC. He is ranked the world's best active boxer, pound for pound, by BoxRec. He is the former WBC and WBA light middleweight champion, former WBC middleweight world champion and former WBO light middleweight champion. He has had 54 pro fights, winning 51 (35 by knockout), losing once and drawing twice. His only loss was to Floyd Mayweather Jr. in 2013.

Álvarez was born in Guadalajara, Jalisco. "Canelo" means cinnamon in Spanish, a common nickname for people with red hair. He has a daughter.

All content from Kiddle encyclopedia articles (including the article images and facts) can be freely used under Attribution-ShareAlike license, unless stated otherwise. Cite this article:
Canelo Álvarez Facts for Kids. Kiddle Encyclopedia.