The southern part of the Las Vegas Valley was referred to as Paradise Valley as early as 1910, owing to a high water table that made the land particularly fertile for farming. County commissioners established a Paradise school district in 1914. 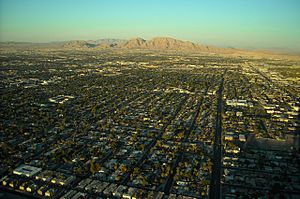 Neighborhoods on the east side of Paradise

In 1950, mayor Ernie Cragin of Las Vegas, looking to fund an ambitious building agenda and pay down the city's rising debt, sought to expand the city's tax base by annexing the Las Vegas Strip which was unincorporated territory. A group of casino executives, led by Gus Greenbaum of the Flamingo, lobbied the county commissioners for township status which would prevent the city from annexing the land without the commission's approval. The commission voted to create the unincorporated township of Paradise on December 8, 1950.

In 1975, Nevada enacted a law that would have incorporated Paradise (along with Sunrise Manor and Winchester) into the City of Las Vegas. Before it could take effect, however, the bill was struck down as unconstitutional by the Nevada Supreme Court.

According to the United States Census Bureau, the census-designated place (CDP) of Paradise (which may not coincide exactly with the town boundaries) has a total area of 46.7 square miles (121 km2), all of it land.

There were 77,209 households out of which 24.6% had children under the age of 18 living with them, 39.7% were married couples living together, 10.5% had a female householder with no husband present, and 43.9% were non-families. 31.9% of all households were made up of individuals and 7.5% had someone living alone who was 65 years of age or older. The average household size was 2.39 and the average family size was 3.04. 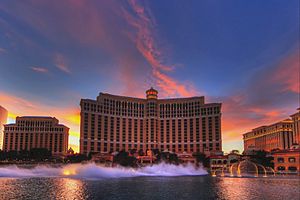 The Bellagio at dusk

All content from Kiddle encyclopedia articles (including the article images and facts) can be freely used under Attribution-ShareAlike license, unless stated otherwise. Cite this article:
Paradise, Nevada Facts for Kids. Kiddle Encyclopedia.