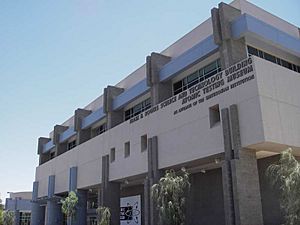 The National Atomic Testing Museum in Las Vegas, Nevada, documents the history of nuclear testing at the Nevada Test Site (NTS) in the desert north of Las Vegas. The museum operates as an affiliate of the Smithsonian Institution.

The museum opened in March 2005 as the "Atomic Testing Museum", operated by the Nevada Test Site Historical Foundation as a 501(c)(3) non-profit organization. It is located in Las Vegas, Nevada, at 755 E. Flamingo Rd., just north of McCarran International Airport and just east of the Las Vegas Strip. Funding included support from the purchase of commemorative Nevada Test Site license plates issued by the Nevada Department of Motor Vehicles.

On December 31, 2011, President Barack Obama signed a military spending bill which included designating the museum as a national museum affiliated with the Smithsonian Institution. The National Atomic Testing Museum is one of 37 national museums in the U.S. 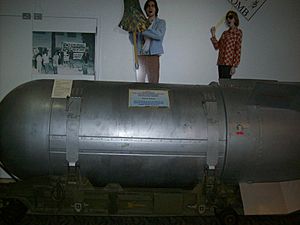 B53 nuclear bomb on display

The museum covers the period from the first test at NTS on January 27, 1951, to the present. Among its exhibits covering American nuclear history is a "Ground Zero Theater" which simulates the experience of observing an atmospheric nuclear test.

Other exhibits include Geiger counters, radio badges and radiation testing devices, Native American artifacts from around the test area, pop culture memorabilia related to the atomic age, and equipment used in testing the devices. Other displays focus on important figures at the facility, videos and interactive exhibits about radiation.

In 2012 the museum added an exhibit about Area 51, and expanded the exhibit two years later. 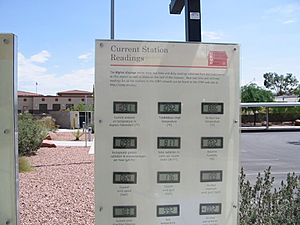 The weather station outside of the National Atomic Testing Museum records weather data for downtown Las Vegas. The data include temperature, wind speed and background gamma radiation in microroentgens per hour. The station is part of the Community Environmental Monitoring Network (CEMP).

All content from Kiddle encyclopedia articles (including the article images and facts) can be freely used under Attribution-ShareAlike license, unless stated otherwise. Cite this article:
National Atomic Testing Museum Facts for Kids. Kiddle Encyclopedia.