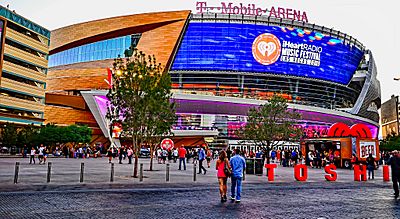 T-Mobile Arena is a multi-purpose indoor arena on the Las Vegas Strip in Paradise, Nevada. Opened on April 6, 2016, the arena was built as a joint venture between MGM Resorts International and the Anschutz Entertainment Group.

The arena is the home venue for the National Hockey League's Vegas Golden Knights, who began play in 2017. Since its opening, T-Mobile Arena has primarily been used for entertainment events such as concerts, and has been booked for mixed martial arts and professional boxing events, and well as other annual sporting events. It was used for the biggest fight in boxing history, as measured by pay-per-view revenue; Floyd Mayweather vs. Conor McGregor.

The arena is accessed by a new development project known as The Park, with retail and dining space between New York-New York and the Park MGM casino hotels.

All content from Kiddle encyclopedia articles (including the article images and facts) can be freely used under Attribution-ShareAlike license, unless stated otherwise. Cite this article:
T-Mobile Arena Facts for Kids. Kiddle Encyclopedia.