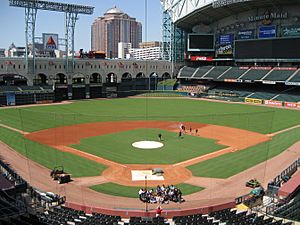 Minute Maid Park is a baseball park in Houston, Texas. It is the home field of the Major League Baseball team called the Houston Astros.

It was originally called Enron Field. After Enron dropped its naming rights, the ballpark was temporarily renamed Astros Field. The park was renamed again when Minute Maid bought the naming rights. Because the ballpark is small and cozy, it is sometimes called "The Juice Box". The stadium has a special roof which can be opened during nice weather and closed during rain. It also has a train above the outfield wall that moves on its track when the Astros get a home run.

On January 26th 2020 the park hosted the WWE ROYAL RUMBLE

All content from Kiddle encyclopedia articles (including the article images and facts) can be freely used under Attribution-ShareAlike license, unless stated otherwise. Cite this article:
Minute Maid Park Facts for Kids. Kiddle Encyclopedia.