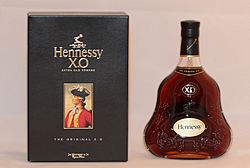 Jas Hennessy & Co. is a company that makes cognac. Its headquarters are in Cognac, France. The company sells more than 50 million bottles a year worldwide. It is the world's largest Cognac maker. It is owned by Moët Hennessy, which is co-owned by LVMH (66%) and Diageo (34%).

Hennessy was established in 1765 by Irishman Richard Hennessy. His son James created the brand Hennessy and named the company Jas Hennessy & Co. He greatly expanded his father's business. While an Irishman, he served in the French Navy. He set up the distillery on the Charent River in Cognac.

The company has been run by eight generations of Hennessys. Their master distillers have been seven generations of the Fillioux family. In 1971 in a merger with champagne maker Moet et Chandon, Kilian Hennessy changed the company name to Moet Hennessy.

In 1795 they sold their cognac in North America. In 1840 Hennessy set up an agency in London for their products. In 1868 they exported to Japan followed by China in 1872. In 1992 Hennessy celebrated their 200th anniversary. They chartered a sailing ship and named it the “Spirit of Hennessy”. In 2009 Hennessy produced a limited edition of Hennessy VS in honor of US President Barack Obama. In gold lettering the bottles are marked “In Honour of the 44th President”. Currently their biggest market is China.

All content from Kiddle encyclopedia articles (including the article images and facts) can be freely used under Attribution-ShareAlike license, unless stated otherwise. Cite this article:
Hennessy Facts for Kids. Kiddle Encyclopedia.