The Irish Independent is Ireland's largest-selling daily newspaper, published by Independent News & Media (INM). It often includes glossy magazines. While most of the paper's content in English, it also publishes a weekly supplement in Irish called Seachtain. ("Seachtain" is the Irish word for "week".) 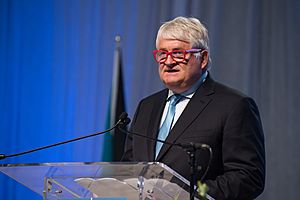 Since May 2012, the Irish Independent has been controlled by billionaire Denis O'Brien since he acquired 29.9% of the paper's parent company

Since May 2012, the Irish Independent has been controlled by billionaire Denis O'Brien since he acquired 29.9% of the paper's parent company. In January 2008, at the same time as completing the purchase Today FM (Ireland's last national radio station independent of O'Brien and state broadcaster RTÉ), O'Brien increased his INM shareholding to become that company's second-biggest shareholder behind Tony O'Reilly, whom he ousted just over four years later. Traditionally a broadsheet newspaper, it introduced an additional compact size in 2004 and in December 2012 (following O'Brien's takeover) it was announced that the newspaper would become compact only.

The Irish Independent was launched by William Martin Murphy. He was a controversial Irish nationalist businessman. He was against Charles Stewart Parnell.

During the 1913 Lockout of workers, Murphy was the leader among the employers. His paper, Irish Independent, published news reports and opinion pieces that were against the workers who were on strike. It wrote that the union's would lose that fight.

The Irish Independent said about the 1916 Easter Rising that it was "insane and criminal". It famously called for the shooting of its leaders.

In December 1919, during the Irish War of Independence, a group of twenty IRA men destroyed the printing works of the paper. They did this because the paper was not writing good things about the Irish Republican Army. They said the paper was pro-British and had a Unionist stance.

In 1924, the traditional nationalist newspaper, the Freeman's Journal, merged with the Irish Independent.

In the 1970s, it was taken over by former Heinz chairman Tony O'Reilly.

All content from Kiddle encyclopedia articles (including the article images and facts) can be freely used under Attribution-ShareAlike license, unless stated otherwise. Cite this article:
Irish Independent Facts for Kids. Kiddle Encyclopedia.