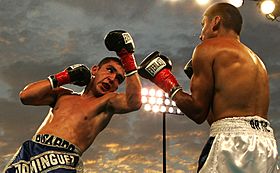 Boxing is one of the world's oldest combat sports. It is usually held in a ring and two boxers (people who fight in boxing fights) wear special gloves and try to hit one another.

There are a few different ways to win in boxing. One is by a way of a knockout, which is when a fighter is knocked to the ground and cannot get back up within ten seconds. Another way is by a technical knockout, which is when the fighter can not continue fighting or the referee stops the fight. Another possibility is winning on points, which a boxer gets by outboxing his or her opponent by hitting the opponent more often, harder, and more accurately. There are also draws in boxing. What in other sports are called "tie" in boxing it's called "draw". A referee can announce a technical draw due to an accidental cut or an accidental wound like a headbutt. Generally, it is considered a "no contest" (NC). However, from the second round, or four in some fights, if the score cards for both fighters are equal, the fight could be called a draw. Boxing is very popular around the world. It is a way to defeat your enemy by physical force.

Since boxing involves forceful, repetitive punching, precautions must be taken to prevent damage to bones in the hand. Most trainers do not allow boxers to train and spar without wrist wraps and boxing gloves. Hand wraps are used to secure the bones in the hand, and the gloves are used to protect the hands from blunt injury, allowing boxers to throw punches with more force than if they did not utilise them. Gloves have been required in competition since the late nineteenth century, though modern boxing gloves are much heavier than those worn by early twentieth-century fighters. Prior to a bout, both boxers agree upon the weight of gloves to be used in the bout, with the understanding that lighter gloves allow heavy punchers to inflict more damage. The brand of gloves can also affect the impact of punches, so this too is usually stipulated before a bout. Both sides are allowed to inspect the wraps and gloves of the opponent to help ensure both are within agreed upon specifications and no tampering has taken place.

A mouthguard is important to protect the teeth and gums from injury, and to cushion the jaw, resulting in a decreased chance of knockout. Both fighters must wear soft soled shoes to reduce the damage from accidental (or intentional) stepping on feet. While older boxing boots more commonly resembled those of a professional wrestler, modern boxing shoes and boots tend to be quite similar to their amateur wrestling counterparts.

Boxing matches typically take place in a boxing ring, a raised platform surrounded by ropes attached to posts rising in each corner. The term "ring" has come to be used as a metaphor for many aspects of prize fighting in general.

In a fully upright stance, the boxer stands with the legs shoulder-width apart and the rear foot a half-step in front of the lead man. Right-handed or orthodox boxers lead with the left foot and fist (for most penetration power). Both feet are parallel, and the right heel is off the ground. The lead (left) fist is held vertically about six inches in front of the face at eye level. The rear (right) fist is held beside the chin and the elbow tucked against the ribcage to protect the body. The chin is tucked into the chest to avoid punches to the jaw which commonly cause knock-outs and is often kept slightly off-center. Wrists are slightly bent to avoid damage when punching and the elbows are kept tucked in to protect the ribcage. Some boxers fight from a crouch, leaning forward and keeping their feet closer together. The stance described is considered the "textbook" stance and fighters are encouraged to change it around once it's been mastered as a base. Case in point, many fast fighters have their hands down and have almost exaggerated footwork, while brawlers or bully fighters tend to slowly stalk their opponents.

Left-handed or southpaw fighters use a mirror image of the orthodox stance, which can create problems for orthodox fighters unaccustomed to receiving jabs, hooks, or crosses from the opposite side. The southpaw stance, conversely, is vulnerable to a straight right hand.

North American fighters tend to favor a more balanced stance, facing the opponent almost squarely, while many European fighters stand with their torso turned more to the side. The positioning of the hands may also vary, as some fighters prefer to have both hands raised in front of the face, risking exposure to body shots.

Modern boxers can sometimes be seen tapping their cheeks or foreheads with their fists in order to remind themselves to keep their hands up (which becomes difficult during long bouts). Boxers are taught to push off with their feet in order to move effectively. Forward motion involves lifting the lead leg and pushing with the rear leg. Rearward motion involves lifting the rear leg and pushing with the lead leg. During lateral motion the leg in the direction of the movement moves first while the opposite leg provides the force needed to move the body.

There are four basic punches in boxing: the jab, cross, hook and uppercut. Any punch other than a jab is considered a power punch. If a boxer is right-handed (orthodox), his left hand is the lead hand and his right hand is the rear hand. For a left-handed boxer or southpaw, the hand positions are reversed. For clarity, the following discussion will assume a right-handed boxer. 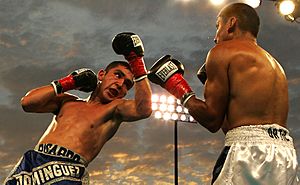 These different punch types can be thrown in rapid succession to form combinations or "combos." The most common is the jab and cross combination, nicknamed the "one-two combo." This is usually an effective combination, because the jab blocks the opponent's view of the cross, making it easier to land cleanly and forcefully.

A large, swinging circular punch starting from a cocked-back position with the arm at a longer extension than the hook and all of the fighter's weight behind it is sometimes referred to as a "roundhouse," "haymaker," "overhand," or sucker-punch. Relying on body weight and centripetal force within a wide arc, the roundhouse can be a powerful blow, but it is often a wild and uncontrolled punch that leaves the fighter delivering it off balance and with an open guard.

Wide, looping punches have the further disadvantage of taking more time to deliver, giving the opponent ample warning to react and counter. For this reason, the haymaker or roundhouse is not a conventional punch, and is regarded by trainers as a mark of poor technique or desperation. Sometimes it has been used, because of its immense potential power, to finish off an already staggering opponent who seems unable or unlikely to take advantage of the poor position it leaves the puncher in.

Another unconventional punch is the rarely used bolo punch, in which the opponent swings an arm out several times in a wide arc, usually as a distraction, before delivering with either that or the other arm.

An illegal punch to the back of the head or neck is known as a rabbit punch.

It should be noted both the hook and uppercut may be thrown with both hands, resulting in differing footwork and positioning from that described above if thrown by the other hand. Generally the analogous opposite is true of the footwork and torso movement.

There are several basic maneuvers a boxer can use in order to evade or block punches, depicted and discussed below.

All content from Kiddle encyclopedia articles (including the article images and facts) can be freely used under Attribution-ShareAlike license, unless stated otherwise. Cite this article:
Boxing Facts for Kids. Kiddle Encyclopedia.