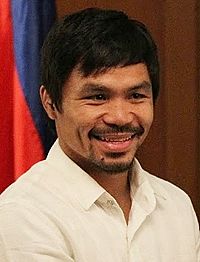 Pacquiao was born in Kibawe, Bukidnon, Philippines. He studied at Notre Dame of Dadiangas University.

He is the only eight-division world champion in the history of boxing. He won eleven major world titles, as well as being the first boxer to win the lineal championship in five different weight classes. Pacquiao is also the first boxer in history to win major world titles in four of the original eight weight classes of boxing: flyweight, featherweight, lightweight, and welterweight.

Pacquiao has generated about 19.6 million in pay-per-view buys and $1.2 billion in revenue from his 24 pay-per-view bouts. According to Forbes, he was the second highest paid athlete in the world as of 2015.

Pacquiao has been seen as a top contender for 2022 presidential election. Current President Rodrigo Duterte said in December 2016 and December 2017 that he wants to make Pacquiao his replacement.

All content from Kiddle encyclopedia articles (including the article images and facts) can be freely used under Attribution-ShareAlike license, unless stated otherwise. Cite this article:
Manny Pacquiao Facts for Kids. Kiddle Encyclopedia.