President of the Philippines facts for kids

However, four vice presidents have assumed the presidency without having been elected to the office, such as by the death or resignation of an incumbent president.

Filipinos refer to their President as Pangulo or Presidente. The President serves a single, fixed, six-year term without possibility of re-election. On June 30, 2016, Rodrigo Duterte was sworn in as the 16th and current president.

Article 7, Section 2 of the Constitution reads that in order to be eligible for President the person must:

As of January 2022, there are four living former Presidents: 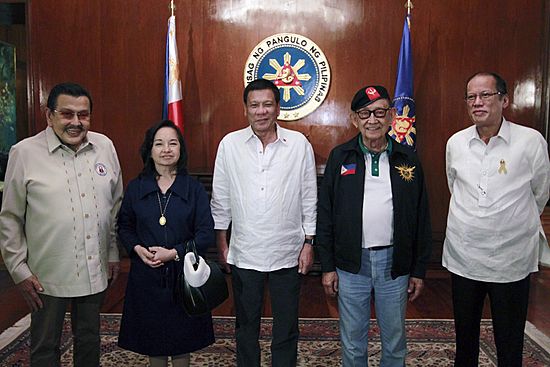 All content from Kiddle encyclopedia articles (including the article images and facts) can be freely used under Attribution-ShareAlike license, unless stated otherwise. Cite this article:
President of the Philippines Facts for Kids. Kiddle Encyclopedia.