List of presidents of the Philippines facts for kids 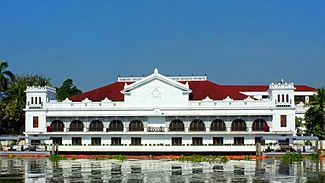 Malacañang Palace in Manila is the official residence of the President

The colors indicate the political party affiliation of each individual.

Prior to the First Republic

The Spaniards colonized the Philippines as the Captaincy General of the Philippines. The Spanish monarchy was represented by the Governor-General from 1565 to 1898. Spain ceded all of its remaining possessions, including the Philippines, save for Cuba at the end of the Spanish–American War via the Treaty of Paris.

The First Philippine Republic was inaugurated on January 23, 1899 at Malolos, and ended on March 23, 1901 when President Emilio Aguinaldo was captured by the Americans at Palanan.

The Americans had already begun controlling areas not controlled by the First Republic after the Spanish cession. The President of the United States is represented first by military governors, then by civilian Governors-General up to 1935.

The Commonwealth was inaugurated on November 15, 1935 at Manila, and ended upon independence on July 4, 1946.

The Second Republic was inaugurated on October 14, 1943 in Manila, and ended when President Jose P. Laurel dissolved the republic on August 17, 1945, in Tokyo.

The Third Republic started when independence was granted by the Americans on July 4, 1946, and ended upon the imposition of martial law by President Ferdinand Marcos on September 21, 1972.

President Corazon Aquino inaugurated the Fifth Republic after the present constitution was ratified. The plebiscite took place on February 2, 1987.

All content from Kiddle encyclopedia articles (including the article images and facts) can be freely used under Attribution-ShareAlike license, unless stated otherwise. Cite this article:
List of presidents of the Philippines Facts for Kids. Kiddle Encyclopedia.