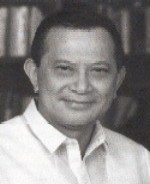 Salvador Roman Hidalgo Laurel (November 18, 1928 – January 27, 2004), also known as Doy Laurel, was a Filipino lawyer and politician. He was Vice President of the Philippines from 1986 to 1992 under President Corazon Aquino and was Prime Minister from 25 February to 25 March 1986.

He was a major leader of the United Nationalist Democratic Organization (UNIDO), the political party that helped end the dictatorship of President Ferdinand Marcos with the 1986 People Power Revolution.

He ran for President in 1992, but lost to Fidel Ramos.

All content from Kiddle encyclopedia articles (including the article images and facts) can be freely used under Attribution-ShareAlike license, unless stated otherwise. Cite this article:
Salvador Laurel Facts for Kids. Kiddle Encyclopedia.