Estrada gained popularity as a film actor, playing the lead role in over a hundred films in an acting career spanning some three decades, and model, who was started as a fashion and ramp model at the age of 13. He used his popularity as an actor to make gains in politics, serving as Mayor of San Juan from 1969 to 1986, as Senator from 1987 to 1992, then as Vice-President under President Fidel V. Ramos from 1992 to 1998.

Estrada was elected President in 1998 with a wide margin of votes separating him from the other challengers, and was sworn into the presidency on June 30, 1998.

José Marcelo Ejército Sr. was born in Tondo, an urban district of Manila. His family later moved to the wealthy suburb of San Juan. He belonged to a wealthy family, and was the eighth of ten children. After graduating from the Ateneo elementary school in 1951, he was expelled during his second year of secondary studies at the Ateneo de Manila University for disciplinary conduct. Later during college he enrolled in a civil engineering course at the Mapúa Institute of Technology. However, he would leave once again and later transferred to Central Colleges of the Philippines but dropped out.

In his twenties, he began a career as a drama actor, usually playing the role of the villain. He adopted the stage name "Joseph Estrada". He also acquired the nickname "Erap" (a play on the Tagalog slang "pare", meaning 'buddy') from a friend and fellow actor. 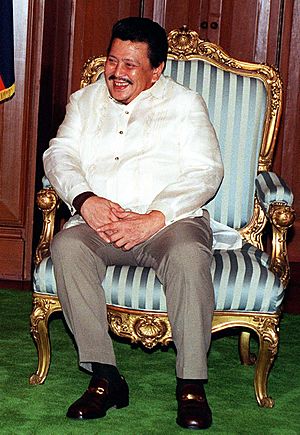 Joseph Estrada is the first President to have previously worked in the entertainment industry as a popular artist, and for being the first to sport any sort of facial hair during his term, specifically his trademark acting mustaches and wristbands.

Estrada played the lead role in more than 100 movies, and produced more than 70 films. He was the first FAMAS Hall of Fame recipient for Best Actor (1981) and also became a Hall of Fame award-winner as a producer (1983). He often played heroes of the lower classes, making him popular among several impoverished citizens. This proved advantageous to his political career.

In 1974 Estrada founded the Movie Workers Welfare Foundation (Mowelfund), which helps filmmakers through medical reimbursements, hospitalization, surgery and death benefits, livelihood, and alternative income opportunities and housing. Its educational arm, the Mowelfund Film Institute, has produced some of the most skilled and respected producers, filmmakers, writers and performers in both the independent and mainstream sectors of the industry since its inception in 1979. He also founded, together with Guillermo de Vega, the first Metro Manila Film Festival in 1975.

Estrada is married to former First Lady-turned-senator Dr. Luisa "Loi" Pimentel, whom he met while she was working at the National Center for Mental Health (NCMH) in Mandaluyong City, and has three children with her.

All content from Kiddle encyclopedia articles (including the article images and facts) can be freely used under Attribution-ShareAlike license, unless stated otherwise. Cite this article:
Joseph Estrada Facts for Kids. Kiddle Encyclopedia.