Rizal Park (Filipino: Liwasang Rizal, Spanish: Parque Rizal), also known as Luneta Park or simply Luneta, is a historical urban park in the Philippines. It was formerly known as Bagumbayan in the era of colonialism under the Spaniards. Rizal Park is located along Roxas Boulevard, Manila, adjacent to the old walled city of Intramuros, it is one of the largest urban parks in Asia. It has been a favorite leisure spot, and is frequented on Sundays and national holidays. Rizal Park is one of the major tourist attractions of Manila. 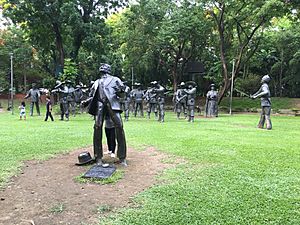 Situated by the Manila Bay, it is an important site in Philippine history. The execution of Filipino patriot José Rizal on December 30, 1896 fanned the flames of the 1896 Philippine Revolution against the Kingdom of Spain. The area was officially renamed Rizal Park in his honor, and the monument enshrining his remains serves as the park's symbolic focal point. The Declaration of Philippine Independence from the United States was held here on July 4, 1946 as were later political rallies including those of Ferdinand Marcos and Corazon Aquino in 1986 that culminated in the EDSA Revolution.

All content from Kiddle encyclopedia articles (including the article images and facts) can be freely used under Attribution-ShareAlike license, unless stated otherwise. Cite this article:
Rizal Park Facts for Kids. Kiddle Encyclopedia.