Intramuros (Latin for "within the walls") is the 0.67 square kilometers (0.26 sq mi) historic walled area within the modern City of Manila, Philippines. It is administered by the Intramuros Administration, which was created through the Presidential Decree No. 1616 signed on April 10, 1979.

Intramuros is also called the Walled City, and at the time of the Spanish Colonial Period was synonymous to the City of Manila. It was the seat of government and political power when the Philippines was a component realm of the Spanish Empire. It was also the center of religion, education and economy. The standard way of life in Intramuros became the standard way of life throughout the Philippines. The Manila Galleons which sailed the Pacific for 250 years, carried goods to and from Intramuros (Manila) and Acapulco, Mexico. 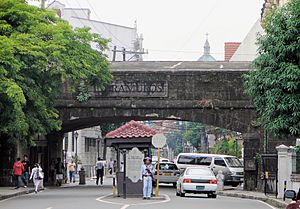 Construction of the defensive walls was started by the Spanish colonial government in the late 16th century to protect the city from foreign invasions. The Walled City was originally located along the shores of the Manila Bay, south of the entrance to Pasig River. Guarding the old city is Fort Santiago, its citadel located at the mouth of the river. Land reclamations during the early 20th century subsequently obscured the walls and fort from the bay. The Battle of Manila in 1945 devastated Intramuros. It is the place where the occupying Japanese Imperial Army made their last stand against American soldiers and Filipino guerillas. The battle destroyed its churches, universities, houses, and government buildings, most of which dated back to the Spanish Colonial Period.

Intramuros, particularly the Fort Santiago, was designated as a National Historical Landmark in 1951. The Intramuros Administration, created through Presidential Decree No. 1616 that was signed on April 10, 1979, is tasked to rebuild, redevelop, administer and preserve remaining buildings, structures and fortifications of Intramuros. San Agustin Church, a UNESCO World Heritage Site under the Baroque Churches of the Philippines, is located within Intramuros.

All content from Kiddle encyclopedia articles (including the article images and facts) can be freely used under Attribution-ShareAlike license, unless stated otherwise. Cite this article:
Intramuros Facts for Kids. Kiddle Encyclopedia.