José Protasio Rizal Mercado y Alonso Realonda, widely known as José Rizal(June 19, 1861 – December 30, 1896), was a Filipino nationalist and polymath during the tail end of the Spanish colonial period of the Philippines. An ophthalmologist by profession, Rizal became a writer and a key member of the Filipino Propaganda Movement which advocated political reforms for the colony under Spain.

He was executed by the Spanish colonial government for the crime of rebellion after the Philippine Revolution, inspired in part by his writings, broke out. Though he was not actively involved in its planning or conduct, he ultimately approved of its goals which eventually led to Philippine independence.

He is widely considered one of the greatest heroes of the Philippines and has been recommended to be so honored by an officially empaneled National Heroes Committee. However, no law, executive order or proclamation has been enacted or issued officially proclaiming any Filipino historical figure as a national hero. He was the author of a number of poems and essays.

He was the seventh child in a family of 11 children (2 boys and 9 girls). His parents went to school and were well known. His father, Francisco Rizal Mercado, worked hard as a farmer in Biñan, Laguna. Rizal looked up to him. His mother, Teodora Alonso Realonda y Quintos, was born in Meisic, Sta. Cruz, Manila. She read a lot and knew about art and many other things. Rizal said she was loving and very smart. He learned the alphabet from his mother when he was three years old. At age five, while learning to read and write, he also showed that he could draw and paint. He surprised his family and relatives with his pencil drawings and sketches and with his moldings of clay.

In 1877, at the age of 16, he finished school (Bachelor of Arts) from the Ateneo Municipal de Manila. In the same year, he went to another school to study Philosophy and Letters at the University of Santo Tomas. At the same time, he took classes to become a surveyor and assessor at the Ateneo. In 1878, he went to the University of Santo Tomas to become a doctor. He stopped in his studies when he felt that the Filipino students were not being treated right by the priests who were also their teachers. 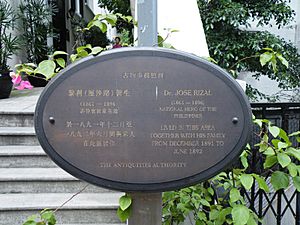 When the Philippine Revolution (the war of Filipinos against the Spaniards) started on August 26, 1896, his enemies went after him fast. They were able to get people to say bad things against him and connected him with the war. He was never allowed to talk to these people. Because the Spanish authorities thought he was responsible for the activities of the rebels, he was exiled to the city of Dapitan in Zamboanga, in the Southern Philippines.

From November 3, 1896 until his death, he was imprisoned at Fort Santiago. During his last days in prison, he wrote a poem which is now known as the Mi Ultimo Adios. The poem contains Rizal's final farewell.

After a trial by the military, he was convicted of rebellion (going against the government), sedition (making trouble) and of illegal association (having meetings that are not allowed by the government). He was sentenced to death and was executed by firing squad in the early morning hours of December 30, 1896 at Bagumbayan Field. His body was initially buried in an unmarked grave in the Paco Cemetery. His bones were then exhumed and are now located in their final resting place at the Rizal Monument.

All content from Kiddle encyclopedia articles (including the article images and facts) can be freely used under Attribution-ShareAlike license, unless stated otherwise. Cite this article:
Jose Rizal Facts for Kids. Kiddle Encyclopedia.