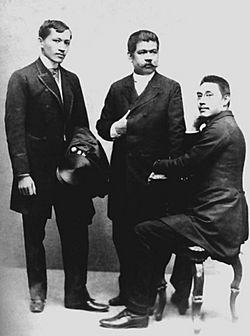 Marcelo H. del Pilar was born in Cupang (now Barangay San Nicolas), Bulacan, on August 30, 1850, to parents Julián del Pilar and Blasa Gatmaytan. He studied at the Colegio de San José and later at the University of Santo Tomas, where he finished his law course in 1880. In 1882, del Pilar founded the nationalist newspaper Diariong Tagalog (Tagalog Newspaper). He organized various anti-friar demonstrations while in the Philippines. He also wrote anti-friar pamphlets like the Dasalan at Tocsohan, Caiigat Cayo, etc. Del Pilar went to Spain in 1888 to escape persecution by the Spanish authorities. He became the second editor of La Solidaridad (Solidarity) in Madrid.

Publication of the La Solidaridad stopped in 1895 due to lack of money. Del Pilar decided to return to the Philippines to lead a revolution against Spain. However, he cancelled his trip due to his illness. Del Pilar died of tuberculosis in Barcelona on July 4, 1896, a pauper, away from his wife and 2 children.

All content from Kiddle encyclopedia articles (including the article images and facts) can be freely used under Attribution-ShareAlike license, unless stated otherwise. Cite this article:
Marcelo H. del Pilar Facts for Kids. Kiddle Encyclopedia.