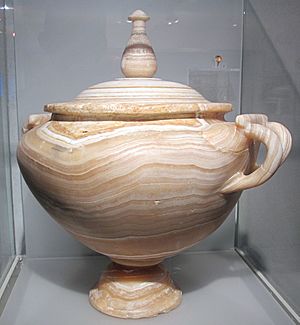 Ancient Roman urn made from alabaster 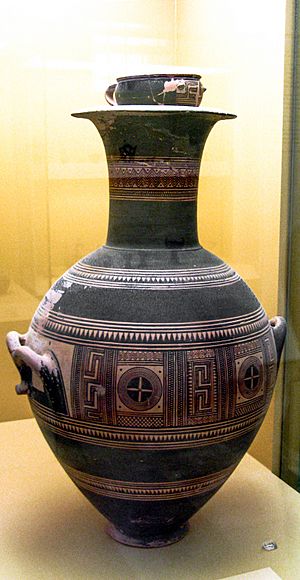 An urn is a vase, often with a cover, with a typically narrowed neck above a rounded body and a footed pedestal. Describing a vessel as an "urn", as opposed to a vase or other terms, generally reflects its use rather than any particular shape or origin. The term is especially often used for funerary urns, vessels used in burials, either to hold the cremated ashes or as grave goods, but is used in many other contexts; in catering large vessels for serving tea or coffee are often called "tea-urns", even when they are metal cylinders of purely functional design. Large sculpted vases are often called urns, whether placed outdoors, in gardens or as architectural ornaments on buildings, or kept inside.

All content from Kiddle encyclopedia articles (including the article images and facts) can be freely used under Attribution-ShareAlike license, unless stated otherwise. Cite this article:
Urn Facts for Kids. Kiddle Encyclopedia.