The provincial flag of Laguna 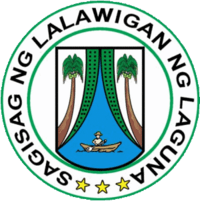 The provincial seal of Laguna

Laguna is a province in the Philippines. It is about 30 kilometres south of Manila. Laguna is named after "La Laguna" which means the lake, meaning Laguna de Bay. This is the largest lake in the Philippines, and is on the north edge of the province. Laguna province has six cities: Biñan, Cabuyao, Calamba, San Pablo, San Pedro, and Santa Rosa. There are two international schools, IB World Schools, to be specific, located in Biñan: Brent International School Manila, and The Beacon Academy.

All content from Kiddle encyclopedia articles (including the article images and facts) can be freely used under Attribution-ShareAlike license, unless stated otherwise. Cite this article:
Laguna (province) Facts for Kids. Kiddle Encyclopedia.