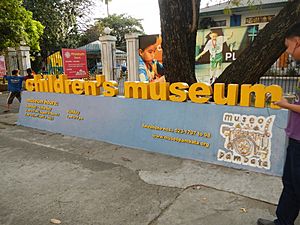 The Museo Pambata (Children's Museum or Museum for Children) is a children's museum in the Ermita district of Manila, near Rizal Park, in the Philippines. It is located in the former Elks Club Building, built in 1910, along Roxas Boulevard at the corner of South Drive.

The Museo Pambata is a children's interactive museum. Unlike traditional museums where items are stored behind glass and touching is highly discouraged, Museo Pambata invites visitors to learn with the exhibits by using their total senses. It envisions itself as a discovery museum and resource center promoting Filipino global culture, children's advocacy programs, and creative educational programs with linkages to global communities. The museum also has regular programs and events for various sectors. 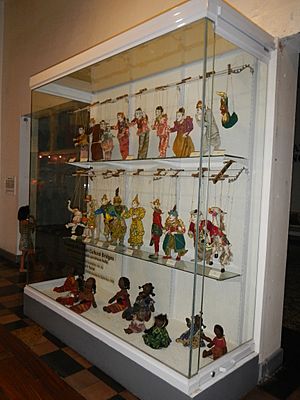 Marionettes display in the children's museum

There are eight theme rooms in Museo Pambata, namely:

Museo Pambata’s educational programs and special activities are anchored on the advocacy of children’s rights, primarily on their right to education, health, recreation, and mental and physical development.

An outstanding activity held in the Karapatan Hall, an area in the museum dedicated to children’s rights, is the Rights of the Child Awareness Tournament in 1995. It was followed by Mag-ROCK Tayo! (Rights Of the Child Kontest) in 2001-2002. In cooperation with the Council for the Welfare of Children (CWC), Plan International, UNICEF, Department of Social Welfare and Development (DSWD), Department of Education (DepEd), and the Manila City schools, these projects familiarized children with their basic rights as stated in the UN Convention on the Rights of the Child.

Kanino ba ang CRC? was a three-day children’s summit held in November 2009 to celebrate the 20th anniversary of the Convention on the Rights of the Child. The summit brought together 50 children who are living in different, often difficult situations. The summit aimed to raise awareness on the Convention on the Rights of the Child by posing the question “Whose responsibility is the CRC?”. Children participants, in plenary and discussions in workshops, shared their views of the rights and responsibilities of the child and crafted messages to people and agencies concerned. The summit was organized with the help of the DSWD, UNICEF, National Council of Social Development, Children’s Lab, CHILDHOPE Asia-Philippines, and other private donors.

Started in 1995, the Mobile Library Program is a reading campaign for the economically disadvantaged children and out-of-school youth of Manila. It aims to impart the value of reading to children through storytelling and book-lending sessions. Six years later, the Mobile Library van was inaugurated through a grant from Ford Foundation Philippines. It is a six-wheeler roving library with over 3,000 children’s books and other learning aids for the benefit of the children of Manila and neighboring cities. In 2011, the van was refurbished through the help of Atty. Ging Gonzalez-Montinola and Pilipinas Hino, Inc.

In line with the Philippine Centennial celebration in 1998, Museo Pambata launched Aklat: Karapatan at Kapangyarihan para sa Kabataan (The Book: The Right and Empowerment of the Youth) or Aklat:KKK. It had two components: the outreach and the in-house programs. Four minilibraries were turned over to the Manila barangays as part of the outreach component, while storytelling sessions became regular Friday and Saturday activities at the Museo Pambata Library and Resource Center.

In 1999, the Office of Manila Mayor Lito Atienza and Museo Pambata launched Sa Aklat Sisikat!, a Manila-wide literacy campaign to promote the habit of reading among children in Manila’s public schools. This innovative pilot campaign addressed the alarming decline in reading abilities and literacy rate in the country, particularly among public schoolchildren.

All content from Kiddle encyclopedia articles (including the article images and facts) can be freely used under Attribution-ShareAlike license, unless stated otherwise. Cite this article:
Museo Pambata Facts for Kids. Kiddle Encyclopedia.