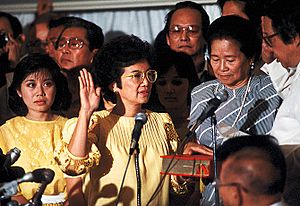 Corazon Aquino was inaugurated as the 11th president of the Philippines on February 25, 1986 at Sampaguita Hall (Now Kalayaan Hall).

This case of nonviolent revolution led to the departure of President Ferdinand Marcos from presidency and the restoration of the country's democracy. It is also referred to as the Yellow Revolution because of the presence of yellow ribbons during the demonstrations following the assassination of Benigno Aquino, Jr..

It was widely seen as a victory of the people against the 20-year running authoritarian, repressive regime of then president Ferdinand Marcos and made news headlines as "the revolution that surprised the world".

All content from Kiddle encyclopedia articles (including the article images and facts) can be freely used under Attribution-ShareAlike license, unless stated otherwise. Cite this article:
People Power Revolution Facts for Kids. Kiddle Encyclopedia.