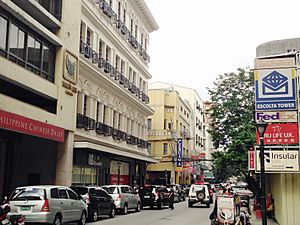 Escolta Street is historic west to east street in the downtown district of Binondo in Manila, the capital of the Philippines. It is very near to (and parallel to) Pasig River. It starts at Plaza Moraga to the west and ends at Plaza Santa Cruz and Quintin Paredes Street to the east. It contains some examples of early skyscraper design in the country. 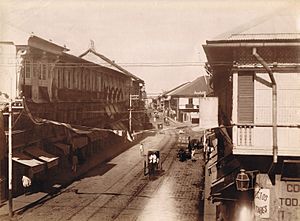 All content from Kiddle encyclopedia articles (including the article images and facts) can be freely used under Attribution-ShareAlike license, unless stated otherwise. Cite this article:
Escolta Street Facts for Kids. Kiddle Encyclopedia.