The President of Philippine Commonwealth had strong control of the islands and was guided by a Supreme Court. The National Assembly or law-making part of the government, members mostly come from the Nacionalista Party, was at first only one, but later became two, a lower part and a higher part. In 1937, the government chose Tagalog, the language of Manila, as the national language. Women were allowed to vote and the economy was strong.

The Philippine Commonwealth had its own constitution, which remained effective until 1973, and was self-governing although foreign policy and military affairs would be under the responsibility of the United States, and certain legislation required the approval of the American President.

It featured a very strong President, a single National Assembly, and a Supreme Court, all composed entirely of Filipinos, as well as an elected Resident Commissioner to the United States House of Representatives (as Puerto Rico does today). An American High Commissioner and an American Military Advisor, were also present in the government while a Field Marshall was in charge of the Philippine Army.

In 1939-40, after an amendment in the Constitution, an upper and lower Congress, consisting of a Philippine Senate, and of a House of Representatives, was restored replacing the National Assembly. 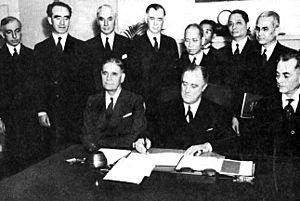 The pre-1935 U.S. territorial administration, or Insular Government, was headed by a governor general who was appointed by the president of the U.S. In December 1932, the U.S. Congress passed the Hare-Hawes-Cutting Act (First Philippine Independence Act) with the premise of granting Filipinos independence. Provisions of the bill included reserving several military and naval bases for the United States, as well as imposing tariffs and quotas on Philippine exports. It was vetoed by President Herbert Hoover but the American Congress overrode his veto in 1933 and passed the bill. The bill, however, was opposed by the then Philippine Senate President Manuel L. Quezon and was also rejected by the Philippine Senate.

This led to the creation and passing of a new bill known as Tydings-McDuffie Act, or Philippine Independence Act, which allowed the establishment of the Commonwealth of the Philippines with a 10-year period of peaceful transition to full independence. The Commonwealth was officially inaugurated on November 15, 1935.

A Constitutional Convention was convened in Manila on July 30, 1934. On February 8, 1935, the 1935 Constitution of the Republic of the Philippines was approved by the convention by a vote of 177 to 1. The constitution was approved by President Franklin D. Roosevelt on March 23, 1935 and ratified by popular vote on May 14, 1935.

The Commonwealth Government was inaugurated on the morning of November 15, 1935, in ceremonies held on the steps of the Old Congress Building in Manila. The event was attended by a crowd of around 300,000 people.

The new government embarked on ambitious nation-building policies in preparation for economic and political independence. These included national defense (such as the National Defense Act of 1935, which organized a conscription for service in the country), greater control over the economy, the perfection of democratic institutions, reforms in education, improvement of transport, the promotion of local capital, industrialization, and the colonization of Mindanao.

However, uncertainties, especially in the diplomatic and military situation in Southeast Asia, in the level of U.S. commitment to the future Republic of the Philippines, and in the economy due to the Great Depression, proved to be major problems. The situation was further complicated by the presence of agrarian unrest, and of power struggles between Osmeña and Quezon, especially after Quezon was permitted to be re-elected after one six-year term.

A proper evaluation of the policies' effectiveness or failure is difficult due to Japanese invasion and occupation during World War II.

Japan launched a surprise attack on the Philippines on December 8, 1941. The Philippine Commonwealth government drafted the Philippine Army into the U.S. Army Forces Far East, which would resist Japanese occupation. Manila was declared an open city to prevent its destruction, and it was occupied by the Japanese on January 2, 1942. Meanwhile, battles against the Japanese continued on the Bataan Peninsula, Corregidor, and Leyte until the final surrender of United States-Philippine forces on May 1942. 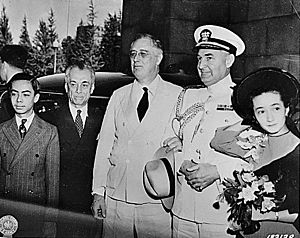 Quezon and Osmeña were escorted by troops from Manila to Corregidor, and later they left for Australia and then the U.S. There they set up a government in exile, which participated in the Pacific War Council as well as the Declaration by United Nations. During this exile, Quezon became ill with tuberculosis, and later he died of it. Osmeña replaced him as the president.

Meanwhile, the Japanese military organized a new government in the Philippines known as the Second Philippine Republic, which was headed by president José P. Laurel. This government ended up being very unpopular.

The resistance to the Japanese occupation continued in the Philippines. This included the Hukbalahap ("People's Army Against the Japanese"), which consisted of 30,000 armed people and controlled much of Central Luzon. Remnants of the Philippine Army also fought the Japanese through guerrilla warfare, and it was successful, since all but 12 of the 48 provinces were liberated. 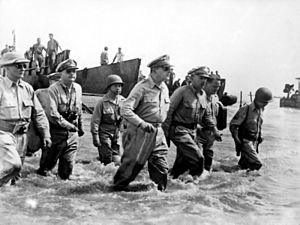 General MacArthur and President Osmeña returning to the Philippines

The American General Douglas MacArthur's army landed on Leyte on 20 October 1944, and they were all welcomed as liberators, along with Philippine Commonwealth troops when other amphibious landings soon followed. Fighting continued in remote corners of the Philippines until Japan's surrender in August 1945, which was signed on 2 September in Tokyo Bay. Estimates for Filipino casualties reached one million, and Manila was extensively damaged when certain Japanese forces refused to vacate the city (against their orders from the Japanese High Command).

The Commonwealth ended when the U.S. recognized Philippine independence on July 4, 1946, as scheduled. However, the economy remained dependent to the U.S. This was due to the Bell Trade Act, otherwise known as the Philippine Trade Act, which was a precondition for receiving war rehabilitation grants from the United States.

At the time, tenant farmers held grievances often rooted to debt caused by the sharecropping system, as well as by the dramatic increase in population, which added economic pressure to the tenant farmers' families. As a result, an agrarian reform program was initiated by the Commonwealth. However, success of the program was hampered by ongoing clashes between tenants and landowners.

An example of these clashes includes one initiated by Benigno Ramos through his Sakdalista movement, which advocated tax reductions, land reforms, the breakup of the large estates or haciendas, and the severing of American ties. The uprising, which occurred in Central Luzon on May, 1935, claimed about a hundred lives.

Due to the diverse number Philippine languages, a program for the "development and adoption of a common national language based on the existing native dialects" was drafted in the 1935 Philippine constitution. The Commonwealth created a Surian ng Wikang Pambansa (National Language Institute), which was composed of Quezon and six other members from various ethnic groups. A deliberation was held and Tagalog (due to its extensive literary tradition) was selected as the basis for the "national language" to be called "Pilipino".

In 1940, the Commonwealth authorized the creation of a dictionary and grammar book for the language. On the same year, Commonwealth Act 570 was passed, allowing Pilipino to become an official language upon independence.

The economy of the Commonwealth was mostly based on farming. agriculture-based. Farmers grew abaca, coconuts and coconut oil, sugar, and timber. Other foreign income came from money spent at the American army, navy, and air bases on the Philippines, such as the naval base at Subic Bay and Clark Air Base. The economy was good until World War II stopped growth.

The following is the estimated number of speakers of the dominant languages:

The colors indicate the political party or party groups of each President at Election Day.

All content from Kiddle encyclopedia articles (including the article images and facts) can be freely used under Attribution-ShareAlike license, unless stated otherwise. Cite this article:
Philippine Commonwealth Facts for Kids. Kiddle Encyclopedia.