Henry Jackson Jr. (December 12, 1912 – October 24, 1988) was an American professional boxer and a world boxing champion who fought under the name Henry Armstrong.

Armstrong was one of the few fighters to win in three or more different divisions: featherweight, lightweight, and welterweight. He defended his welterweight title a total of nineteen times.

Armstrong was born December 12, 1912, in Columbus, Mississippi but moved with his family to St. Louis, Missouri, during his childhood, where he became involved in boxing. He was the son of Henry Jackson Sr., a sharecropper of African American, Irish and Native American descent, and America Jackson whom was Native American (Iroquois). Armstrong graduated from Vashon High School in St. Louis and was later inducted into the St. Louis Walk of Fame. Armstrong's two nicknames were Hurricane Henry and Homicide' Hank.

Armstrong began his professional career on July 28, 1931, in a fight with Al Iovino, in which Armstrong was knocked out in three rounds. His first win came later that year, beating Sammy Burns by a decision in six. In 1932, Armstrong moved to Los Angeles, where he lost two four-round decisions in a row to Eddie Trujillo and Al Greenfield. Following these two losses, however, he started a streak of 11 wins.

In 1936, Armstrong split his time among Los Angeles, Mexico City and St. Louis. A few notable opponents of that year include Ritchie Fontaine, Arizmendi, former world champion Juan Zurita and Mike Belloise. Early in his career, he fought some fights under the nickname Melody Jackson.

In 1937 Armstrong won his first 22 bouts. He beat Casanova in three rounds, Belloise in four, Joe Rivers in three, former world champion Frankie Klick in four and former world champion Benny Bass in four. Armstrong was then given his first world title fight, for the title in the 126 pound weight class against World Featherweight Champion Petey Sarron at Madison Square Garden. Armstrong knocked Sarron out in six rounds, becoming the World Featherweight Champion.

In 1938, Armstrong started with seven more knockouts in a row, including one over future world champion Chalky Wright. The streak finally ended when Arizmendi lasted ten rounds before losing a decision to Armstrong in their fourth fight. Armstrong's streak of 27 knockout wins in a row qualifies as one of the longest knockout win streaks in the history of boxing, according to The Ring magazine.

Later in 1938, Armstrong, still the Featherweight division world champion, challenged a fellow member of the three division champions' club, Barney Ross, then World Welterweight Champion, for the title. Armstrong, at 133½ pounds, beat Ross, 142 pounds, by unanimous decision, adding the World Welterweight Championship to his belt. He then lost weight and beat World Lightweight Champion Lou Ambers by split decision, becoming the first boxer ever to hold world championships in three different weight divisions at the same time. He decided not to make the 126 pound weight anymore and left the featherweight crown vacant.

Armstrong dedicated the next two years to defending the welterweight crown, beating, among others, future World Middleweight Champion Ceferino Garcia and Bobby Pacho, before defending his Lightweight belt in a rematch with Ambers, which he lost on a 15-round decision. After that, he concentrated once again on defending the world Welterweight title, and made eight defenses in a row, the last of which was a nine-round knockout win over Puerto Rico's Pedro Montañez.

He then sought to become the first boxer to win world titles in four different categories in a rematch with Garcia, already the World Middleweight Champion, but the fight ended in a ten-round draw, and so Armstrong's attempt to win a fourth division's world title was frustrated. According to boxing historian Bert Sugar, many felt Armstrong deserved the decision in this fight. 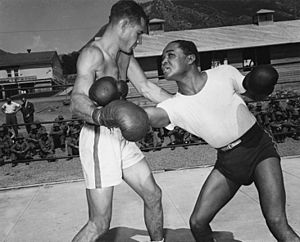 Armstrong (right) demonstrating some boxing techniques to a US Army member during an exhibition tour in 1943.

After retiring from boxing in 1946, Armstrong briefly opened a Harlem nightclub, the Melody Room (named after his first nickname). Apart from the ceremonies and galas that he attended afterward, he led a quiet retirement. He became a born-again Christian and an ordained Baptist minister and youth advocate, and he taught young fighters how to box.

Armstrong became a member of the International Boxing Hall of Fame. He died in 1988 at the age of 75 in Los Angeles, California.

All content from Kiddle encyclopedia articles (including the article images and facts) can be freely used under Attribution-ShareAlike license, unless stated otherwise. Cite this article:
Henry Armstrong Facts for Kids. Kiddle Encyclopedia.