Riyadh (Arabic: الرياض‎code: ar is deprecated ar-Riyāḍ) is the capital city and largest city of Saudi Arabia. It is in Ar Riyad Province in the Najd region. It is in the center of the Arabian peninsula on a large plateau and it has 4,260,000 people (about 20% of all the nation's people). Riyadh is also a very modern city with tall skyscrapers.

The old town of Riyadh within the city walls did not exceed an area of 1 km2, and therefore very few significant architectural remnants of the original walled oasis town of Riyadh exist today. The most prominent is the Masmak fort and some parts of the original wall structure with its gate which have been restored and reconstructed. There are also a number of traditional mud-brick houses within these old limits, but they are for the most part dilapidated.

Expansion outside the city walls was slow to begin with, although there were some smaller oases and settlements surrounding Riyadh. The first major construction beyond the walls was King Abdulaziz's Murabba Palace. It was constructed in 1936, completed in 1938, and a household of 800 people moved into it in 1938. The palace is now part of a bigger complex called The King Abdulaziz Historical Centre.

There are other traditional villages and towns in the area around traditional Riyadh which the urban sprawl reached and currently encompasses. These include Diriyah, Manfuha and Wadi Laban. Unlike in the early days of development in Riyadh during which vernacular structures were razed to the ground without consideration, there is a new-found appreciation for traditional architecture. The Saudi Commission for Tourism and National Heritage is making efforts to revitalize the historic architecture in Riyadh and other parts of the kingdom.

Ain Heet cave has an underground lake (150 meters deep) situated at the face of Mount Al Jubayl in Wadi As Sulay in a small village called Heet in Riyadh. Between Riyadh and Al Kharj road, it is one of the easily accessible caves in the area of Riyadh.

The archeological sites at Riyadh which are of historical importance, in which the Municipality of Riyadh is involved, are the five old gates on the old walls of Riyadh. These are the eastern gate of Thumaira, the northern gate of Al-Suwailen, the southern gate of Dukhna, the western gate of Al-Madhbah and the south-western gate of Shumaisi. There are also four historic palaces, which are the Musmak Palace, the Al-Murabba Palace (palace of King Abdul Aziz), Prince Muhammad bin Abdul-Rahman and the Shamsiya Palace.

The Turaif district, is another important archaeological site inscribed in UNESCO World Heritage List on July 31, 2010. It was founded in the 15th century bearing an architectural style of Najdi. There are some Historic palaces and monuments in Al-Turaif district include: Salwa Palace, Saad bin Saud Palace, The Guest House and At-Turaif Bath House, and Imam Mohammad bin Saud Mosque. 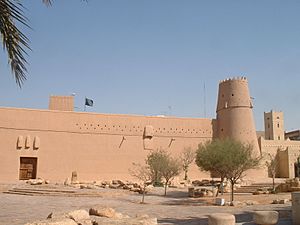 This fortress was built around 1865 under the reign of Mohammed ibn Abdullah ibn Rasheed (1289-1315 AH), the ruler of Ha'il to the north, who had wrested control of the city from the rival clan of Al Saud. In January 1902 Ibn Saud, who was at the time living in exile in Kuwait, succeeded in capturing the Masmak fortress from its Rashid garrison. The event, which restored Saudi control over Riyadh, has acquired almost mythical status in the history of Saudi Arabia. The story of the event is often retold, and has as its central theme the heroism and bravery of the King Abd Abdulaziz Ibn Saud. The Masmak Fortress is now a museum and is in close proximity to the Clock Tower Square, also known to English-speaking residents as Chop Chop Square, referring to the capital punishment that takes place there.

All content from Kiddle encyclopedia articles (including the article images and facts) can be freely used under Attribution-ShareAlike license, unless stated otherwise. Cite this article:
Riyadh Facts for Kids. Kiddle Encyclopedia.