4th millennium BC facts for kids

The 4th millennium BC saw major changes in human culture. It marked the beginning of the Bronze Age and of writing.

The city states of Sumer and the kingdom of Egypt were started and grew to prominence. Agriculture spread widely across Eurasia. World population in the course of the millennium doubled to approximately from 7 to 14 million people in the area surrounding them. 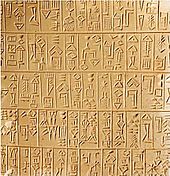 All content from Kiddle encyclopedia articles (including the article images and facts) can be freely used under Attribution-ShareAlike license, unless stated otherwise. Cite this article:
4th millennium BC Facts for Kids. Kiddle Encyclopedia.