Percentage of population which is urbanized, by country, in year 2015. 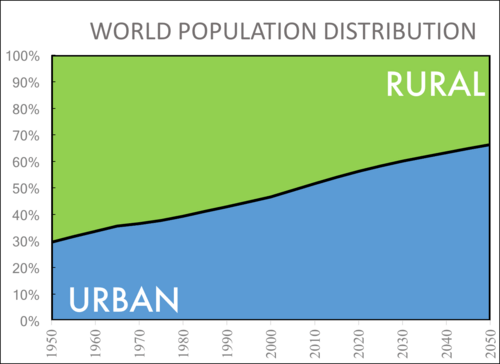 Urbanization (or urbanisation) is a term from geography. The base of the word is the Latin urbs, which means city. The term urbanisation means that lifestyle that is common in a city becomes prevalent. This can happen in two different ways:

Stewart Brand's book Whole Earth Discipline argues that urbanization helps the environment overall. First, the birth rate of new urban dwellers falls immediately to replacement rate, and keeps falling. This can prevent overpopulation in the future. Secondly, it puts a stop to destructive subsistence farming methods, like slash and burn agriculture. Finally, it reduces land use by humans, leaving more for nature.

All content from Kiddle encyclopedia articles (including the article images and facts) can be freely used under Attribution-ShareAlike license, unless stated otherwise. Cite this article:
Urbanization Facts for Kids. Kiddle Encyclopedia.