Johnson County is a county located in the U.S. state of Iowa. As of the 2010 census, the population was 130,882 making it the fifth-most populous county in Iowa. The county seat is Iowa City, home of the University of Iowa. The county is named for Richard Mentor Johnson, the ninth vice president of the United States.

Johnson County was created on December 21, 1837 by the legislature of the Wisconsin Territory. The county was carved out of territory formerly in Dubuque County, and was not initially provided with a civil government, instead being governed by Cedar County officials. It was named for the US Vice President Richard M. Johnson.

The first courthouse in the county was a two story log cabin structure, built in 1838 in the town of Napoleon, about two miles south of the current courthouse. The building stood across from what later would become the James McCollister Farmstead on land later owned by Philip Clark. 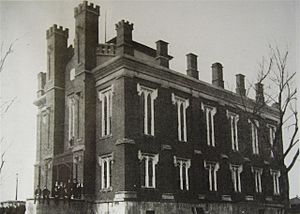 After Iowa City was established by fiat as the new territorial capitol of Iowa, the county seat was removed there. The second Johnson County Courthouse, the first in Iowa City, was built on Lot 8 Block 8 of the County Seat Addition to Iowa City in 1842 for $3,690. This location was in the southeast corner of the intersection of Harrison and Clinton Streets. The building was intended to be 56 x 28 feet and two stories tall. The building was built by James Trimble, who had previously built the first jail.

A third courthouse was built in 1857 in the courthouse square located on Clinton Street between Court and Harrison Streets. It was used until it was found to be dangerous due to cracks in the south wall in 1899. The building was apparently built of brick with stone and wood ornamentation.

The Richardsonian Romanesque style courthouse in use today was designed by the firm of Rush, Bowman and Rush of Grand Rapids, MI. It was bid at a cost of $111,000 and built by the firm Rowson and Son of Johnson County. The cornerstone was laid in December 1899. The building's tower was based on Henry Hobson Richardson's design for the spire of Trinity Church in Boston. The building was dedicated on June 8, 1901. The currently unused jail that stands to the west of the courthouse was designed by C.L. Wundt of Burlington on behalf of the Stewart Iron Works, Cleveland, OH and bid for $14,000. 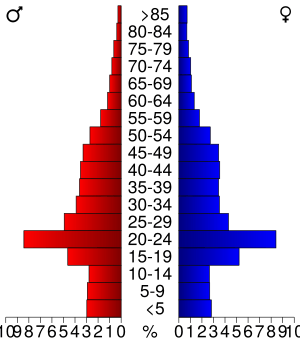 The population ranking of the following table is based on the 2010 census of Johnson County.

All content from Kiddle encyclopedia articles (including the article images and facts) can be freely used under Attribution-ShareAlike license, unless stated otherwise. Cite this article:
Johnson County, Iowa Facts for Kids. Kiddle Encyclopedia.