Iowa County is one of seven counties in the United States to share the same name as the state they are located in. The other six counties are Arkansas County, Hawaii County, Idaho County, New York County, Oklahoma County, and Utah County.

Iowa County was formed on February 17, 1843. It was named for the Iowa River, which flows through the county.

Iowa County is home to the Amana Colonies, a group of settlements of German Pietists, comprising seven villages. Calling themselves the Ebenezer Society or the Community of True Inspiration (German: die Gemeinde der wahren Inspiration), they first settled in New York state near Buffalo in what is now West Seneca. However, in order to live out their beliefs in more isolated surroundings they moved west, to Iowa County in 1855, living a communal life until the mid-1930s. Today, Amana is a major tourist attraction known mainly for its restaurants and craft shops, and the colonies as a whole have been listed as a National Historic Landmark since 1965.

The county is intersected by the Iowa River and the north fork of the English River. 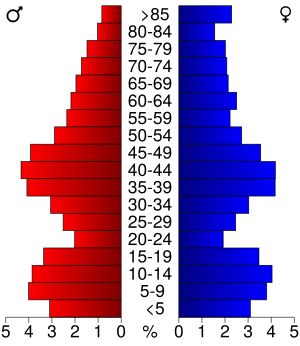 The population ranking of the following table is based on the 2010 census of Iowa County.

All content from Kiddle encyclopedia articles (including the article images and facts) can be freely used under Attribution-ShareAlike license, unless stated otherwise. Cite this article:
Iowa County, Iowa Facts for Kids. Kiddle Encyclopedia.