Keokuk County is a county located in the U.S. state of Iowa. As of the 2020 United States Census, the population was 10,033. The county seat is Sigourney.

Keokuk County was formed in 1837. It was named for the eponymous chief of the Sac Indians, who advocated peace with the white settlers. In May 1843, the county opened for public settlement and was self-governed from 1844. Previously it was governed by Washington County. After a debate lasting a few years for the location for the county seat, the right went to Sigourney in 1856.

The Keokuk County Courthouse in Sigourney was built in 1911. It has been listed on the National Register of Historic Places since 1981. 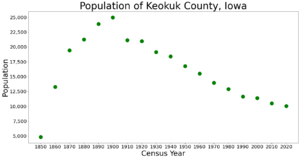 Population of Keokuk County from US census data

The population ranking of the following table is based on the 2010 census of Keokuk County.

All content from Kiddle encyclopedia articles (including the article images and facts) can be freely used under Attribution-ShareAlike license, unless stated otherwise. Cite this article:
Keokuk County, Iowa Facts for Kids. Kiddle Encyclopedia.