Mahaska County is a county located in the U.S. state of Iowa. As of the 2020 census, the population was 22,190. The county seat is Oskaloosa. 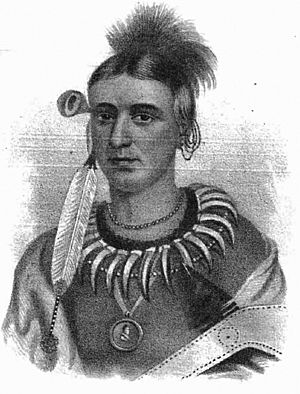 Mahaska County was formed on February 17, 1843. The county has been self-governing since February 5, 1844. It was named after Chief Mahaska of the Iowa tribe. The county was the first in Iowa to have a sheriff and a justice of peace.

The first courthouse was completed in January, 1846. The second structure was put into use on February 27, 1886. The first school, a small log cabin one-half mile (ca. 2 km) east of Oskaloosa, was opened on September 16, 1844 and the Cumberland Presbyterian Church opened as the first church in 1846. On July 2, 1850, the first edition of the Iowa Herald was issued (today the Oskaloosa Herald). In 1864, the first tracks were laid through the county of the Des Moines Valley Railroad.

Coal mining was once a major industry in Mahaska County. In the 19th century, Muchakinock, about 5 miles (8.0 km) south of Oskaloosa, was probably the largest and most prosperous coal camp in Iowa. 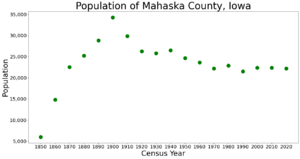 Population of Mahaska County from US census data

The population ranking of the following table is based on the 2010 census of Mahaska County.

All content from Kiddle encyclopedia articles (including the article images and facts) can be freely used under Attribution-ShareAlike license, unless stated otherwise. Cite this article:
Mahaska County, Iowa Facts for Kids. Kiddle Encyclopedia.