Kids Encyclopedia Facts
Not to be confused with Monroe, Iowa.

Monroe County is a county located in the south central part of the U.S. state of Iowa. In the early 20th century, it was a center of bituminous coal mining and in 1910 had a population of more than 25,000. As mining declined, people moved elsewhere for work. In the 2020 census, the population was 7,577. The county seat is Albia. The county, originally called Kishkekosh County after a famous chief of the Meskwaki, was re-named for James Monroe, fifth President of the United States 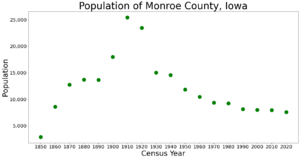 Population of Monroe County from US census data

The population ranking of the following table is based on the 2010 census of Monroe County.

All content from Kiddle encyclopedia articles (including the article images and facts) can be freely used under Attribution-ShareAlike license, unless stated otherwise. Cite this article:
Monroe County, Iowa Facts for Kids. Kiddle Encyclopedia.