Appanoose County is a county in the U.S. state of Iowa. As of the 2020 census, the population was 12,317. Its county seat is Centerville. 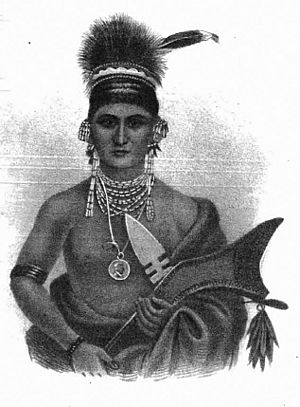 Appanoose County was formed on February 17, 1843, from open territory. It was named for the Meskwaki Chief Appanoose, who did not engage in war against Black Hawk, advocating peace. The present county seat was formerly called Chaldea, and was later renamed to Senterville in honor of Congressman William Tandy Senter of Tennessee. In April 1848, the courthouse, constructed at the expense of $160, was put into use and served as such until 1857. The second courthouse was opened in 1864, and was burned down to the first floor during an explosive Fourth of July fireworks demonstration. The third courthouse was dedicated on May 21, 1903, and remains in use. 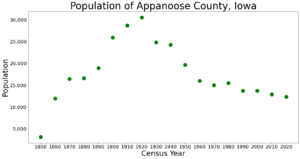 Population of Appanoose County from US census data

The population ranking of the following table is based on the 2010 census of Appanoose County.

All content from Kiddle encyclopedia articles (including the article images and facts) can be freely used under Attribution-ShareAlike license, unless stated otherwise. Cite this article:
Appanoose County, Iowa Facts for Kids. Kiddle Encyclopedia.