Wayne County is a county located in the U.S. state of Iowa. As of the 2020 census, the population was 6,497, making it the sixth-least populous county in Iowa. The county seat is Corydon.

Wayne County was formed in 1846 but was still attached to other counties for governmental purposes. It was named after General Anthony Wayne.

Its southern border with Missouri was uncertain until the states got a decision from the US Supreme Court in 1848 which held the 1816 Sullivan line (re-marked in 1850), originally run as the northern boundary of an Osage Indian cession. This line is not a true east-west line so the county does not have an exactly rectangular shape.

There had been settlement in this county as early as 1841 by persons thinking they were in Missouri, but the first settlers intending to be in Iowa came about 1848. Its government was organized and the county seat selected in 1851. 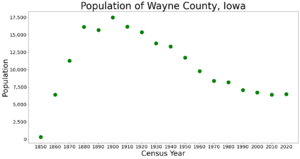 Population of Wayne County from US census data

The population ranking of the following table is based on the 2010 census of Wayne County.

All content from Kiddle encyclopedia articles (including the article images and facts) can be freely used under Attribution-ShareAlike license, unless stated otherwise. Cite this article:
Wayne County, Iowa Facts for Kids. Kiddle Encyclopedia.