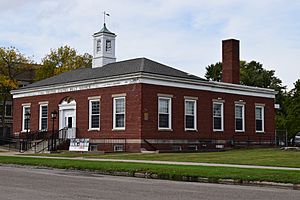 The town was laid out and platted in 1851 and later that year designated as the county seat. The town was named by county judge Seth Anderson after his old home town of Corydon, Indiana.

Corydon is the hometown of Olympic gold medalist George Saling. Saling won the 110 meter hurdles in the 1932 Summer Olympics in Los Angeles with a time of 14.6 seconds.

The school district's sports complex bears his name, Saling Sports Complex, and the annual George Saling Race is part of the community's Old Settler's Celebration held the second weekend in August. Each year, Wayne Community High School's class reunions are held during the Old Settler's Celebration while the majority of former students are in town visiting relatives and friends.

According to the United States Census Bureau, the city has a total area of 1.39 square miles (3.60 km2), all of it land. 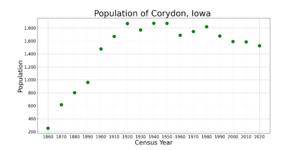 The population of Corydon, Iowa from US census data

There were 680 households, of which 26.8% had children under the age of 18 living with them, 47.1% were married couples living together, 9.1% had a female householder with no husband present, 4.3% had a male householder with no wife present, and 39.6% were non-families. 34.7% of all households were made up of individuals, and 21.6% had someone living alone who was 65 years of age or older. The average household size was 2.20 and the average family size was 2.82.

The Prairie Trails Museum of Wayne County is located on the eastern side of Corydon on Highway 2. It features a brick building that houses 25,000 artifacts in five galleries covering over 21,000 sq ft (2,000 m2), and a large barn with farm antiques. Permanent exhibits include a tribute to the Mormon Trail and depiction of the Ocobock Bank in Corydon along with the original safe that was robbed by Jesse James and other members of the James-Younger Gang on June 3, 1871.

The Corydon post office contains a mural entitled Volunteer Fire Department, painted in 1942 by Marion Gilmore. Murals were produced from 1934 to 1943 in the United States through the Section of Painting and Sculpture, later called the Section of Fine Arts, of the Treasury Department.

Corydon is served by Iowa Highways 2 and 14 which make up the southern, eastern and northeastern portion of the town square.

Rail service through Corydon is provided by the Union Pacific Railroad. Since the Union Pacific merged with the Chicago and North Western Railway (C&NW) in 1995, there has been a considerable increase in rail traffic on the line. The line was originally the Rock Island's Short line from Allerton to Minneapolis. After the Rock Island ceased operations, its main track between Kansas City and Allerton was combined with the Short Line to form C&NW's "Spine Line" between Kansas City and Minneapolis and that designation has been retained by Union Pacific. The Rock Island depot was removed in the late 1950s with passenger service provided through Allerton, 6 miles to the southwest until about 1970.

Corydon was also served by the CB&Q Railroad. The line originally was the Keokuk & Western line from Humeston in the northwest part of Wayne County through Corydon, Promise City, Centerville and into northeastern Missouri. It then became part of the Chicago, Burlington and Quincy Railroad. The line was abandoned between Corydon and Centerville in 1958. The line was completely abandoned from Corydon to Humeston in the early 1970s. Depot service was maintained until abandonment, the last few years by a mobile depot that serviced Humeston, Mt. Ayr, Corydon, and Leon on set days of the week. The CB&Q and Rock Island depots in Corydon were just 1/4 mile apart, with the Rock Island depot being on Depot Street at the end of Greeley Street. The Burlington depot still existed as a warehouse into the 2010's but has been razed.

All content from Kiddle encyclopedia articles (including the article images and facts) can be freely used under Attribution-ShareAlike license, unless stated otherwise. Cite this article:
Corydon, Iowa Facts for Kids. Kiddle Encyclopedia.