Oskaloosa is a city in, and the county seat of, Mahaska County, Iowa, United States. In the late nineteenth and early twentieth century, Oskaloosa was a national center of bituminous coal mining. The population was 11,558 in the 2020 U.S. Census, an increase from 10,938 in 2000. 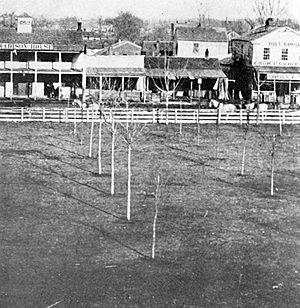 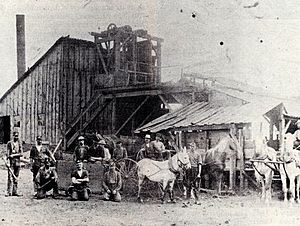 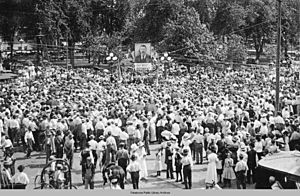 Theodore Roosevelt campaigns in the Oskaloosa city square in the fall of 1912.

Oskaloosa derives its name from Ouscaloosa who, according to town lore, was a Creek princess who married Seminole chief Osceola. A local tradition was that her name meant "last of the beautiful." (This interpretation of "last of the beautiful" is not correct. "Oskaloosa" in the Mvskoke-Creek language means "black rain," from the Mvskoke words "oske" (rain) and "lvste" (black). "loosa" is an English corruption of the Mvskoke word "lvste". See for example the Wikipedia entry for Tuskaloosa, eponym of the town of Tuscaloosa, Alabama. In addition the Mvskoke word "Ouscaloosa" means "Black Water"). The first European-American settlers arrived in 1835, led by Nathan Boone, youngest son of frontiersman Daniel Boone. Acting on instructions from Stephen W. Kearny, he selected this as the first site of Fort Des Moines, located on a high ridge between the Skunk and Des Moines rivers. The ridge was originally called the Narrows.

The town was formally platted in 1844 when William Canfield moved his trading post from the Des Moines River to Oskaloosa. The town was designated by the legislature as the county seat in the same year.

In the 1880s, more than one million tons of bituminous coal was mined in the area from 38 mines. The first mine in the area was opened shortly after 1853 by Robert Seevers, who drove a drift into a 4-foot coalbed in an exposed creek bank east of town. Initially, coal was mined entirely for local consumption, but with the arrival of the railroads, coal from the region was shipped widely. By 1887, the report of the state mine inspector listed 11 coal mines in and around Oskaloosa. By 1895 the coal output of Mahaska County surpassed that of all other Iowa counties, and production had reached more than one million tons per year. In 1911, coal mining was reported to be the primary industry in the region. In 1914, the Carbon Block Coal Company of Centerville produced more than 100,000 tons of coal, ranking among the top 24 coal producers in the state.

Several major coal-mining camps were located in the Oskaloosa area. Muchakinock was about 5 miles south of town, on the banks of the Muchakinock Creek. Lost Creek was a mining camp about 8 miles southeast of town. On January 24, 1902, there was a mine explosion in the Lost Creek No. 2 mine. This was one of only two major mine disasters in Iowa between 1888 and 1913. A miner setting shots to blast coal from the coal face re-used a hole left over from a previous failed shot, and the result was a coal dust explosion that detonated barrels of gunpowder stored in the mine. 20 men died on the site and 14 more were badly injured. The explosion sparked a statewide miner's strike. As a result, in April 1903, the legislature enacted a law to regulate blasting in coal mines. 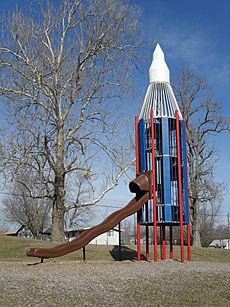 The Southern Iowa Fair is one of the largest traditional county fairs in Iowa and is held each July.

Art on the Square is held each June on the city square. This event features local and regional artists.

Sweet Corn Serenade is held each August on the city square. A concert by the municipal band is the highlight of the corn-on-the-cob and pork burger feast.

Each December, the Lighted Christmas Parade travels through the downtown area on two consecutive nights. The floats in the parade are adorned with lights for the after-dark event.

In the city's town square is a bronze statue of Chief Mahaska, the 19th-century leader of a Native American tribe called the Ioway; he was memorialized by the name of Mahaska County. Restored in the 21st century, the statue was completed in 1907 by an Iowa-born sculptor named Sherry Edmundson Fry (1879–1966). At the time it was commissioned, Fry was living in Paris. He returned to Iowa the following summer to make preparatory drawings of Meskwaki at the nearby Settlement at Tama, Iowa, and to collect Indian artifacts and other reference materials. Returning to Paris, he began on a clay scale model, which he first showed at the Paris Salon in 1907. A year later, Fry exhibited the final full-sized sculpture, for which he won the Prix de Rome. Soon after, it was shipped to the US, and arrived in Oskaloosa by railroad in September. The formal dedication of the statue was held on May 12, 1909, and attended by a crowd of about 12,000 people.

Oskaloosa boasts two private homes designed in 1948–51 by American architect Frank Lloyd Wright. Typical of his Usonian homes, these are the Carroll Alsop House at 1907 A Street and the Jack Lamberson House at 511 North Park Avenue.

In 1934, Oskaloosa became the first city in the United States to fingerprint all of its citizens, including children.

The city is mentioned in country and western singer Johnny Cash's song "I've Been Everywhere."

The first settlers in the area brought along their instruments and a deep love of music. Residents organized a town band in 1864. In 1880 the band was called the K. T. Band (for Knight Templars). About 1882 the city erected a double-deck bandstand in the center of the city park. The band had started playing in the city park when it was just a field. A brick walk through the park was constructed with money raised from a local talent minstrel show. In 1886 the K. T. Band went to St. Louis for their national conclave and was a tremendous hit. That marked the beginning of the band's prominence in the Midwest.

Charles L. Barnhouse developed the band "atmosphere" from the time he came to Oskaloosa in 1891. He exerted a creative influence to build up a musical organization that would become the pride of the city. His band garnered statewide acclaim, becoming the official band of the Iowa State Fair for four years. In 1904 the band played at the annual National Encampment of the Grand Army of the Republic in Louisville, Kentucky. En route, it played by invitation at the World's Fair in Saint Louis, Missouri. In the ensuing years the band became popular throughout Iowa and other states.

Oskaloosa is also the headquarters of the music publisher C.L. Barnhouse Company.

Oskaloosa was the home of the now-defunct Oskaloosa College.

All content from Kiddle encyclopedia articles (including the article images and facts) can be freely used under Attribution-ShareAlike license, unless stated otherwise. Cite this article:
Oskaloosa, Iowa Facts for Kids. Kiddle Encyclopedia.