The Iowa State Fair is an annual state fair held in Des Moines, Iowa in August.

It began in 1854 and has been held on the Iowa State Fairgrounds since 1886. It is based in the state capital Des Moines, Iowa over 11 days in August. With over a million visitors it is one of the largest and best known state fairs in the United States. 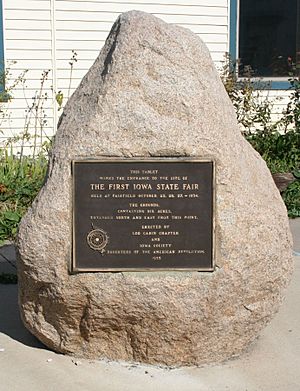 The Grand Concourse, located between the Grandstand and the Varied Industries Building, during the 2006 Iowa State Fair

The Fair moved permanently within the Des Moines city limits in 1878. After the Iowa State Legislature and the City of Des Moines appropriated funds for the Fair in 1886, it moved to its current location at East 30th and East Grand in Des Moines.

The fair was not held in 1898, due to the celebration of the World's Fair in nearby Omaha, Nebraska, as well as the Spanish–American War, 1942–1945 due to World War II, when the state allowed military personnel to use the grounds as a supply depot, nor 2020 due to the COVID-19 pandemic.

The Fair was the setting for the 1933 film State Fair and its 1945 musical adaptation.

The Iowa State Fair was canceled for the 2020 season, the state fair board determining that holding a fair in accordance with current health guidelines relating to COVID-19 would not be feasible. The board was also influenced by surveys that indicated the likelihood of much smaller attendance if the fair was held. People who had bought tickets/passes that year can save them up for the next.

The fairgrounds are filled with carnival rides and vendors during the fair. 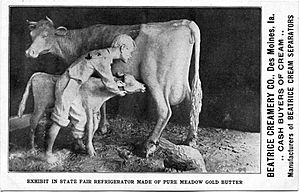 The butter cow, an Iowa State Fair staple since 1911 when J.K. Daniels sculpted the first one, is located in the Agricultural Building. After sculpting her first butter cow in 1960, Norma "Duffy" Lyon sculpted all six breeds of dairy cows over the next 45 years, as well as Garth Brooks, a butter version of Grant Wood's American Gothic, the Peanuts characters, Iowa native John Wayne, Elvis Presley, a Harley-Davidson motorcycle, various animals and a butter rendition of Leonardo da Vinci's The Last Supper. Lyon was succeeded in 2006 by her longtime apprentice, Sarah Pratt.

The Iowa State Fair has a variety of food, including healthy and gluten-free offerings, from more than 200 food stands. The fair is known for its food on a stick, which numbered over 70 offerings in 2015. Some of the most distinctive are deep fried, including Snickers, Oreos, fried Cokes, cheesecake, pickle dawg (pastrami or ham with cream cheese and pickle), and butter, a popular addition when it was introduced in 2011. Other meat-on-a stick products include pork chop, the most endemic food at the fair, given the state's status as the country's top hog producer, and a bacon-wrapped hot dog dipped in a cornmeal batter. In 2019, the Buffalo Chicken Chimichanga was introduced.

The Iowa State Fair Grandstand sells tickets to concerts during the event.

Bill Riley's Iowa State Fair Talent Search debuted in 1959 and features Iowans ages 2 to 21. In 1996, Riley retired after 50 Fairs and 37 Fair Talent Shows and the Plaza Stage was renamed the Anne and Bill Riley Stage. He died in December 2006, succeeded by Bill Riley Jr., who has been host since 1997. Nearly 100 local qualifying shows are held across the state. There are seven days of preliminary competition for Sprouts (ages 2–12) and Seniors (ages 13–21), followed by the semi-finals and, ultimately, the selection of a Sprout and Senior champion. The Talent Search is postponed until 2021.

The Iowa State Fair Parade occurs the day before the opening of the State Fair.

The Iowa State Fair Police Department was established in 2018, replacing the combination of private security guards and local law enforcement agencies that previously provided security and policing services to the Fairgrounds. Officers wear a blue uniform with a distinctive white cowboy hat. The police officers are state-certified officers, but funded by the Iowa State Fair Authority. Officers work year-round, providing services to the State Fair and other events held at the Fairgrounds. There are six full-time police officers and a number of part-time officers, made up of both retired and active-duty officers. People arrested at the Fair are booked on site, and transported to Polk County Jail by Des Moines Police Department and the Iowa State Patrol.

All content from Kiddle encyclopedia articles (including the article images and facts) can be freely used under Attribution-ShareAlike license, unless stated otherwise. Cite this article:
Iowa State Fair Facts for Kids. Kiddle Encyclopedia.