Fairfield is a city in, and the county seat of, Jefferson County, Iowa, United States. It has a population totaling 9,464 people according to the 2010 census. It is a Midwestern city surrounded by rolling farmlands filled with corn, soybean, cattle, and hogs with a median family income of $46,138 (10% of families below the poverty line). The city became the county seat in 1839 with 110 residents and grew to 650 by 1847. Its library was established in 1853, and it held its first fair in 1854. Early architecture includes work by George Franklin Barber and Barry Byrne, who trained under Frank Lloyd Wright.

The city has an “abundance of start-up companies” and has been called "one of the state's economic superstars." It has received The Grassroots Rural Entrepreneurship Award, been nicknamed “silicorn valley,” and was featured in a 2012 episode of the TV show, Oprah's Next Chapter. It has been the home of Maharishi University of Management (formerly Maharishi International University) since 1974 and has been referred to as "the world's largest training center" for practitioners of the Transcendental Meditation technique. The city includes the $6 million Fairfield Arts & Convention Center (FACC), built in 2007. In 2010, it was named one of six Iowa Great Places. It was named by Smithsonian magazine as one of "The 20 Best Small Towns to Visit in 2013."

The city has 12 public parks and recreation areas consisting of more than 1,300 acres and is governed by a seven-member city council. The Fairfield Community School District is home to nearly 2,500 students, teachers, administrators, and staff, with three elementary schools, a middle school, and a high school. The city has two private schools, Maharishi School of the Age of Enlightenment and Cornerstone Primary School. Fairfield has its own municipal airport, several radio stations, a local public-access television station, and a daily newspaper. 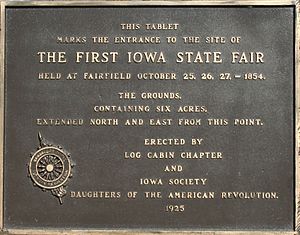 The area now known as Jefferson County was first settled in 1836, and became Jefferson County in 1839, with the new community of Fairfield as the county seat. The name was suggested by Nancy Bonnifield, one of the settlers, because it aptly described the fair fields of the area. But also author Susan Welty suggests it was a play of words on her own name (bonny field). By 1840, Fairfield had a population of 110 and grew to 650 in 1847. The city was the site of the first and second Iowa State Fairs.

Fairfield's library was established in 1853, and was the first library in the state of Iowa. It was first housed in a rented room off the city square. Fairfield's library became the first Carnegie Library outside of Pennsylvania or Scotland funded by Andrew Carnegie, who donated $40,000 to build the library. The Carnegie building on the corner of Washington and Court streets became the library's home on November 28, 1893. Then in May 1996, the library moved to its present location on West Adams Street. The library has over 220,000 items and received accreditation from the State Library of Iowa in 2009.

The first fair was held October 25–27, 1854 on 6 acres (24,000 m2) of land surrounded by a 10-foot-high (3.0 m) fence. The total cost to hold the fair was around $320, and public admission was 25 cents per person. It is estimated that between 7,000 and 10,000 fair goers attended this historical event. Parsons College was founded in 1875. In 1893 the Carnegie Library was completed, the first west of the Mississippi. During the time leading up to the American Civil War, Fairfield was a stopping point for the Underground Railroad. Ultimately, over 1,600 residents of Jefferson County served in the Union Army.

Early architecture in Fairfield includes Victorian houses designed by George Franklin Barber as well a 1915 house designed by Barry Byrne, who trained under Frank Lloyd Wright. A 1930s bank building was designed in the Streamline Moderne style. Commercial and institutional architecture were influenced by the Louden Industries, including the Louden Foundry. Fairfield is the site of the prototype Carnegie library. In 1892 Senator, James F. Wilson met with Andrew Carnegie and secured a grant to build the first community-based library in the U.S. This served as the model for 2,700 libraries worldwide. Parsons College later received a grant to build a Carnegie Library. Fairfield became one of the few cities that had two Carnegie Libraries. The Richardsonian Romanesque work is now operated by Indian Hills Community College as a satellite campus building, as a new library was built in 1996.

Fairfield's geography is typical of the American Midwest: around the city is rolling farmland specializing in corn, soybeans, cattle and hogs. Running west–east through the city is U.S. Route 34; the city of Burlington is to the east and Ottumwa to the west. North-South is Iowa Highway 1, leading north to Iowa City and south to the Missouri state border.

There were 4,201 households of which 23.1% had children under the age of 18 living with them, 39.2% were married couples living together, 10.1% had a female householder with no husband present, 3.5% had a male householder with no wife present, and 47.2% were non-families. 39.7% of all households were made up of individuals and 12.6% had someone living alone who was 65 years of age or older. The average household size was 2.09 and the average family size was 2.76.

There were 4,063 households out of which 30.0% had children under the age of 18 living with them, 45.2% were married couples living together, 10.1% had a female householder with no husband present, and 41.6% were non-families. 35.9% of all households were made up of individuals and 12.0% had someone living alone who was 65 years of age or older. The average household size was 2.22 and the average family size was 2.90.

On the first Friday night of every month, Fairfield hosts the 1st Fridays Art Walk, which attracts more than 2,500 visitors and showcases local and national artists in downtown galleries and occasional live, outdoor music. In 2005, the city's Friday Art Walk was named Iowa's Tourism Event of the Year. In 2006, the city was named one of the "12 Great Places You've Never Heard Of" by Mother Earth News magazine, which cited its notable health spa and high number of restaurants and art galleries. It characterized the city as a "sustainable and cosmopolitan town". In the same year, the Iowa Department of Cultural Affairs designated Fairfield as one of the Iowa Great Places.

In 2009, a concert by The Beach Boys and The Nadas was held on the Fairfield Middle School grounds, as a benefit for the FACC and the city's Green Sustainability Plan. The concert was sponsored by the David Lynch Foundation. This was the 40th, and final performance of The Beach Boys' summer tour of 2009. Fairfield was selected by the Iowa Department of Cultural Affairs to be one of six Iowa Great Places to participate in new program to revitalize the cultural arts in 2010.

Fairfield has been described as an "international center" for Transcendental Meditation; a "national magnet" and "the world's largest training center" for practitioners of the Transcendental Meditation technique. Many of its current residents moved there to participate in the group practice of the TM and TM-Sidhi program inside one of the two golden domes built in 1981 and 1982 on the Maharishi University of Management campus. Locally, TM practitioners are sometimes called "roos", slang for gurus, a term they have appropriated, although they "refer to themselves as meditators". Fairfield natives are sometimes known as "townies". Yogic Flyers living in Fairfield who are not part of the university are said to be members of the "Town Super Radiance" (TSR) community. In 2004, National Public Radio reported that "after 30 years, many in Iowa are comfortable with Fairfield's TM community" and a 2008 article in the Wall Street Journal said "natives lived uneasily with the outsiders...but the election of Mr. Malloy [in 2001]... helped ease those tensions".

Author Jack Forem wrote in 2012 that Fairfield is home to one of the largest synagogues in Iowa and one of the largest Liberal Catholic Churches in the nation. That year Oprah Winfrey visited Fairfield to interview citizens and was given a tour the town. An account of her visit titled "America's Most Unusual Town", was broadcast in March 2012 via the Oprah Winfrey Network.

In 2013 Fairfield was named by Smithsonian magazine as one of "The 20 Best Small Towns to Visit in 2013" and was visited by actor Jim Carrey, who visited again in 2014. Past celebrity visitors include film director David Lynch, singer-songwriter Donovan, musician Moby, musician James McCartney psychiatry professor Norman E. Rosenthal, CNN correspondent Candy Crowley, and actor Jim Carrey.

Fairfield has 12 public parks and recreation areas consisting over 1,300 acres (over 5.5 km2) and a "master trail plan" underway that includes a 17-mile (27 km) trail system. Some of the trail is paved, five miles (8 km) of trail is covered with lime chips while other areas include traditional wooded paths. The trail system connects several areas of interest including the Neff Family Wetlands dike, and the BNSF Trail segment, which crosses a new bridge that joins Walton Lake with Chautauqua Park. The final trail plan includes a "heritage path" leading to historical sites and a water trail that connects the area's river and three lakes. In 2012, Fairfield was selected" as one of ten finalists" in the Blue Zones community, "small city category" primarily because of its "many walking trails and outdoor activities". In 2015 Fairfield was named a certified Blue Zones Community®.

All content from Kiddle encyclopedia articles (including the article images and facts) can be freely used under Attribution-ShareAlike license, unless stated otherwise. Cite this article:
Fairfield, Iowa Facts for Kids. Kiddle Encyclopedia.