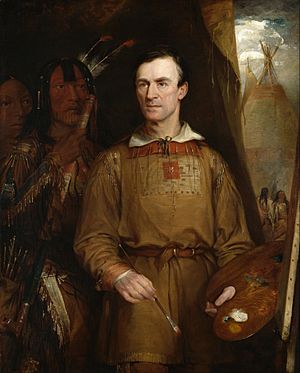 A painting of George Catlin. It was painted by William Fisk in the year 1849.

George Catlin (July 26, 1796-December 23, 1872) was an American painter and author. He traveled a lot, and painted a lot of pictures of Native American people in the Western United States. He was born in Wilkes-Barre in the state of Pennsylvania. He died in the city of Jersey City in the state of New Jersey.

All content from Kiddle encyclopedia articles (including the article images and facts) can be freely used under Attribution-ShareAlike license, unless stated otherwise. Cite this article:
George Catlin Facts for Kids. Kiddle Encyclopedia.