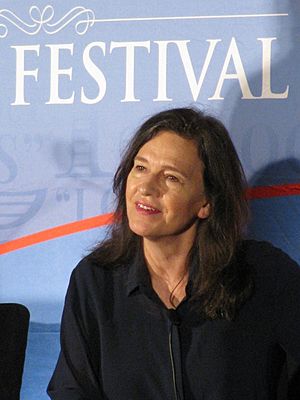 Louise Erdrich is an American author. She was born on June 7, 1954, in Minnesota. Erdrich lived in North Dakota as a child. Her mother is Chippewa. She has a German-American father. Louise incorporates Native American themes in her books. Major characters represent both sides of her heritage and background. She was married to Michael Anthony Dorris, who was a writer and professor of Native American studies at Dartmouth.

Erdrich was named a most beautiful person in People magazine. She was a finalist for the National Book Award for fiction in 2001 for her book The Last Report on the Miracles at Little No Horse. She received the award in 2012 for The Round House. She has written novels, short stories, poetry, and children's books. Some of these works are Love Medicine, Tracks, and The Plague of Doves. From 1972 to 1976, she attended Dartmouth College. She received the Academy of Poets Prize in 1975. She also received her Bachelor of Arts degree in 1976.

All content from Kiddle encyclopedia articles (including the article images and facts) can be freely used under Attribution-ShareAlike license, unless stated otherwise. Cite this article:
Louise Erdrich Facts for Kids. Kiddle Encyclopedia.