Little Falls is a city in Morrison County, Minnesota, United States, near the geographic center of the state. Established in 1848, Little Falls is one of the oldest European-American cities in Minnesota. It is the county seat of Morrison County. The population was 8,343 at the 2010 census. Little Falls was the boyhood home of noted aviator Charles Lindbergh. Just across from his former home is Charles A. Lindbergh State Park, named after Lindbergh's father, prominent Minnesota lawyer and U.S. Congressman Charles August Lindbergh.

The town developed at falls on the Mississippi River, and was named after them. Several different dams have been built over the falls during the town's history, some of which powered sawmills in the 19th century. Today, the Little Falls Dam is a hydroelectric station that generates power for the surrounding area.

U.S. Highway 10 and Minnesota State Highways 27 and 371 are three of the main routes in the city.

Little Falls formerly featured a large ravine, which ran through the east side business district, past the Morrison County Courthouse and the original Little Falls City Hall. The ravine served as an outflow for excess water from Fletcher Creek, which flows into the Mississippi River about 6 miles north of the city. Filling of the ravine began in the 1880s, continuing until the 1950s. It was directly filled with dirt in some locations, while buildings were built over it in other places. 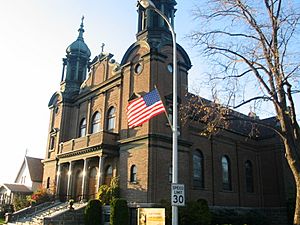 Our Lady of Lourdes

Created by artist Frank Gosiak, two large colored murals, depicting the logging era and main street Little Falls in the early 1900s, grace the façade of the Hennepin Paper Co. warehouse on Broadway Avenue West across from Cass Gilbert Depot. A third Gosiak mural "Door Into the Past" depicts the history of Little Falls evolving into present day Little Falls. The mural is located at the intersection of Broadway Avenue East and Second Street. Also there are two public frescoes that make their home in Lindbergh Elementary School. Both were created by local artist Charles Kapsner. The first, "The Stewardship" was completed in 1994 and portrays the values of famous aviator Charles Lindbergh. This fresco may be seen at all times of the day from 9th Street SE as it is placed in a glass hall. The other fresco, "Beginnings", is housed in the interior of the school. It depicts the origins of Central Minnesota life and history.

The mansions of Charles A. Weyerhaeuser and Richard "Drew" Musser stand on 1st St SE alongside the Mississippi River and adjacent to Maple Island Park. These houses are furnished with antiques and original belongings of the entrepreneurial families who once occupied them. Today the estates are collectively referred to as the Linden Hill Historical Event Center and are used for education, tours, overnight stays, conferences/retreats, weddings, family reunions and assorted special events.

Pine Grove Primeval Park and Zoo is located on the west side of town and nestled amongst the towering pines of a 70-acre (280,000 m2) park features a zoo, walking trails, picnic and playground area, a granite "council circle", and a rustic log shelter.

On the southeast side of town there is the St. Francis Convent and Campus. St. Francis Covent was founded by the Roman Catholic order of Franciscan Sisters of the Immaculate Conception of Little Falls, Minnesota, in 1891.

The Minnesota Fishing Museum (MFM) is a non-profit organization dedicated to preserving the heritage and history of freshwater fishing in Minnesota. The MFM features over 8,000 artifacts in two large display rooms, the O'FISH-L Gift Shop plus tourism and DNR information. The MFM and the Minnesota Department of Natural Resources (DNR) partner in the MinnAqua education programs. The MFM is also host of the Let's Go Fishing Minnesota, Little Falls Chapter.

The Paul Larson Memorial Museum, owned by John Monahan, is a collection of boats, motors and trailers. The museum is a tribute to Paul Larson, founder of the Little Falls-based Larson Boats, as well as the Fred Larson Wildlife Animal Collection.

The Burton-Rosenmeier House was built in 1903 for Barney Burton. Barney Burton, born to Isaac and Sarah Burton, was the seventh of eight children. At the age of 18, he moved from Wisconsin to St. Cloud, Minnesota, where he engaged in the clothing and men's furnishing business with his brother, Jacob, as a partner. In 1886, they moved their business to Little Falls, but in 1891, the brothers dissolved their partnership. Nevertheless, the business kept growing and the Barney Burton Clothing Store became the largest mercantile business in Morrison County. Barney Burton married Sarah Deautsch, of Minneapolis, in 1894. Sarah died after the birth of their daughter. In 1898, Barney married Josephine, a sister of Sarah, and had three children. At the turn of the century, they were becoming increasingly prosperous in the Little Falls community and began their process of planning and building a home. In 1903, they started to build their house in the Classical Revival Style. Barney died of a heart attack in 1942 and Josephine died in 1953. Christian and Linda Rosenmeier moved to Little Falls in 1914 and resided in a flat over the Barney Burton Clothing Store. In 1921, they purchased the home with their three children, Gordon, Margaret and Donald from the Burton family. Christian had a long career as an attorney, a president of the American National Bank and American Savings and Trust Company, and as a Minnesota State Senator from 1922 to 1932. As a State Senator, he was the author of the legislation, and helped in establishing Camp Ripley and Lindbergh State Park. Gordon Rosenmeier, the oldest son of Christian, followed in his father's footsteps. In 1940, he was elected to the unexpired term of the late senator Fred Miller of Little Falls, and he served in the Minnesota State Senate under eight successive governors. During his three decades of service, he authored a succession of major bills that left a lasting impression on the affairs of all Minnesotans. On a wider scale, these men were respected "movers" and "shakers in the development of policies and laws that made the state of Minnesota a better place to live. Gordon was also a corporate attorney for the local lumber barons, R.D. Musser and C.A. Weyerheauser, whose mansions are on the adjacent property to the Rosenmeier estate. The story of Gordon would not be complete without mentioning his dearest friend and companion, Margaret Hastings. After her divorce, she resettled in Brainerd where she had accepted a teaching position. Gordon provided advice and counsel in her relocation process. Margaret served as a sounding board for Gordon's pursuit of better government. She became an active participant in documenting Gordon's political life through a series of scrapbooks she had kept, which provided an orderly collection of media commentary. The Burton-Rosenmeier House serves as the Little Falls Convention and Visitors Bureau.

Beginning in 2005, the Dam Festival is an annual event that takes place in Maple Island Park, LeBourget Park and surrounding areas near the town's dam in late June. Activities include street dances, simple games, face painting, food, a petting zoo, pony rides, bingo, karaoke, a parade, and specialty shows. The event usually culminates with a fireworks show over the Mississippi River.

In June 2013, The Voice USA season 3 contestant Nicholas David performed a concert at the festival.

The Arts and Craft Fair is an annual fair held the weekend after Labor Day. It is sponsored by the Little Falls Chamber of Commerce since 1972.

It is, by far, the busiest time of year for the scenic town.

This event held the weekend after Labor Day as well. It is held at Le Bourget Park on the West Side of town. Sponsored by the West Side Improvement Association.

An annual fair held at the Morrison County Fairgrounds northeast of town.

The club hosts this show the First Weekend in May Annually out at the Morrison County Fairgrounds. It features plowing, a swap meet, consignment auction, flea market, antique tractor pull, and more! 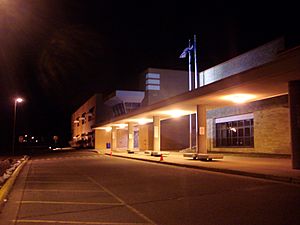 Little Falls has several schools which include:

All content from Kiddle encyclopedia articles (including the article images and facts) can be freely used under Attribution-ShareAlike license, unless stated otherwise. Cite this article:
Little Falls, Minnesota Facts for Kids. Kiddle Encyclopedia.