Brainerd is a city in Crow Wing County, Minnesota, United States. Its population was 13,592 as of the 2010 census. It is the county seat of Crow Wing County, and is one of the largest cities in Central Minnesota. Brainerd straddles the Mississippi River several miles upstream from its confluence with the Crow Wing River, having been founded as a site for a railroad crossing above said confluence. Brainerd is the principal city of the Brainerd Micropolitan Area, a micropolitan area covering Cass and Crow Wing counties and with a combined population of 91,067 as of the 2010 census. The Brainerd area serves as a major tourist destination for Minnesota, and Baxter is a regional retail center.

Brainerd is the home to one of five medevac helicopter flight stations in the state for "AirCare," operated by North Memorial Medical Center in Robbinsdale, a Level 1 Trauma Center. This station covers the central part of Minnesota. The city is also known for the Brainerd International Raceway, which hosts races frequently throughout the year and has a national drag racing meet annually in August.

The area that is now Brainerd was originally territory inhabited by the Ojibwe.

Brainerd was first seen by European settlers on Christmas Day in 1805, when Zebulon Pike stopped there while searching for the headwaters of the Mississippi River. Crow Wing Village, a fur and logging community near Fort Ripley, brought settlers to the area in the mid-19th century.

In those early years the relationship between the settlers and the native Americans was complicated. The most famous example of this tenuous relationship was the so-called "Blueberry War" of 1872. Two Ojibwe were hanged for allegedly murdering a missing girl. When a group of native Americans approached the town, troops from nearby Fort Ripley were called to prevent a potential reprisal. As it turned out, however, the Ojibwe only wanted to sell blueberries and the settlers avoided a bloody misunderstanding. Guilt of the two native Americans was never proven. 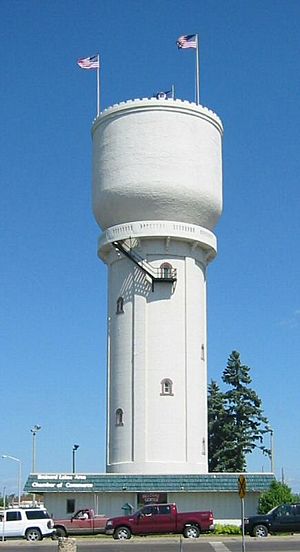 Brainerd was the idea of Northern Pacific railroad president John Gregory Smith, who in 1870 named the township after his wife, Anne Eliza Brainerd Smith, and father-in-law, Lawrence Brainerd. The company built a bridge over the Mississippi seven miles north of Crow Wing Village and used the Brainerd station as a machine and car shop, prompting many to move north and abandon Crow Wing. Brainerd was organized as a city on March 6, 1873.

On January 11, 1876, the state legislature revoked Brainerd's charter for six years, as a reaction to the election of local handyman Thomas Lanihan as mayor instead of Judge C.B. Sleeper. Brainerd functioned as a township in the interim.

In 1881, the railroad, and with it the town, expanded. Lumber and paper, as well as agriculture in general, were important early industries, but for many decades Brainerd remained a railroad town: in the 1920s roughly 90 percent of Brainerd residents were dependent on the railroad. Participation in the nationwide railroad strike on July 1, 1922, left the majority of Brainerd residents unemployed and embittered many of those involved.

On October 27, 1933, the First National Bank of Brainerd became briefly famous when it was held up by Baby Face Nelson and his gang.

Over the years, increased efficiency and the better positioning of the more centralized Livingston, Montana, shops led to a decline in the importance of a railroad station that once employed over 1000 and serviced locomotives for the whole Northern Pacific line. The BNSF Railway (successor to the Northern Pacific) continues to employ approximately 70 people in Brainerd at a maintenance-of-way equipment shop responsible for performing repairs and preventive maintenance to track and equipment.

The Northwest Paper Company built Brainerd's first paper mill in 1903 and with the steady increase in tourism since the early 20th century the paper and service industries have become Brainerd's primary employers. The town's coating mill was sold by Potlatch to Missota Paper in 2003 and then by Missota Paper to Wausau Paper in 2004.

Brainerd itself is now heavily developed into commercial and residential areas and most new construction in the area takes place in neighboring Baxter.

Brainerd is located just north of the geographical center of Minnesota in a relatively hilly terminal moraine area created by the Superior Lobe of the Labradorian ice sheet. The town occupies land on both sides of the Mississippi River, though the older parts of Brainerd are almost all to the east.

Though the city itself has relatively few lakes, there are over 460 lakes within 25 miles (40 km) of Brainerd, located mostly to the north. For this reason, Crow Wing County and parts of the adjoining counties are often collectively referred to as the Brainerd Lakes Area.

Brainerd has been assigned ZIP code 56401 by the USPS.

The following routes are located in the Brainerd area.

There were 5,851 households of which 30.2% had children under the age of 18 living with them, 31.7% were married couples living together, 15.6% had a female householder with no husband present, 5.2% had a male householder with no wife present, and 47.5% were non-families. 37.8% of all households were made up of individuals and 14.2% had someone living alone who was 65 years of age or older. The average household size was 2.23 and the average family size was 2.92.

There were 5,623 households of which 29.4% had children under the age of 18 living with them, 35.8% were married couples living together, 14.3% had a female householder with no husband present, and 46.0% were non-families. 37.5% of all households were made up of individuals and 16.8% had someone living alone who was 65 years of age or older. The average household size was 2.23 and the average family size was 2.94.

In 2016, Brainerd was reported to be the poorest town in Minnesota, with a median household income of $32,169.

All content from Kiddle encyclopedia articles (including the article images and facts) can be freely used under Attribution-ShareAlike license, unless stated otherwise. Cite this article:
Brainerd, Minnesota Facts for Kids. Kiddle Encyclopedia.