Crow Wing County is a county in the East Central part of the U.S. state of Minnesota. As of the 2020 United States Census, the population was 66,123. Its county seat is Brainerd. The county was formed in 1857, and was organized in 1870.

Crow Wing county was established on May 23, 1857 and organized March 3, 1870. It is named for the Crow Wing River, which is itself named for an island in the river which is shaped like the wing of a crow.

Twenty years or more before the county was outlined and named, a trading post was established on the east side of the Mississippi River opposite the mouth of the Crow Wing River. In 1837 there was again a station of the fur traders facing the northern mouth of the Crow Wing River. A few years later it became the center of Indian trading and had the general supply store for the area. By 1866, the village contained about 600 whites and Chippewas and was one of the major population centers in Minnesota. Although the county seat, Crow Wing was soon superseded by Brainerd and eventually became a ghost town known as Old Crow Wing, its memory is preserved by Crow Wing State Park.

Brainerd township was founded in 1870 when the Northern Pacific survey determined that the crossing of the Mississippi should be there. It became a city on November 19, 1881. The name was chosen in honor of the wife of J. Gregory Smith, the first president of the Northern Pacific Railroad Company. Mrs. Brainerd Smith was the author of novels, books of travel and other works. 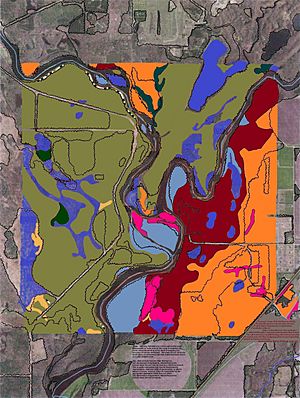 The Northern Pacific Railroad ran its first train to Brainerd, a special train, on March 11, 1871 and its regular passenger service began the next September. The first passenger train from the Twin Cities, by way of Sauk Rapids, came November 1, 1877.

The part of Crow Wing County west of the Mississippi was annexed from Cass County by an act of the Legislature on February 18, 1887, doubling its former area.

Crow Wing County has two state forests, the Crow Wing State Forest and the Emily State Forest. It also has the Cuyuna Lakes State Trail which lies in the Upper Mississippi River Basin. The topography of the region is gently rolling to flat, with waters and wetlands generously interspersed with the woodlands that cover the landscape. It is home to an abundance of wildlife. Visitors may see white-tailed deer, cottontail rabbit, snowshoe hare, raccoon, red fox, gray fox, coyote, mink, muskrat, squirrels, and beaver. Occasionally, American black bears may be observed. Bald eagles and osprey frequent the area, and many species of waterfowl also take advantage of the abundant aquatic habitat found in the marshes and lakes of the county.

There are many lakes and rivers in Crow Wing County. The main river is the Mississippi River although there are more smaller streams in the county too. It has about 417 recognized lakes. The top ten ranked according to size are:

Crow Wing County contains the Burlington Northern (Brainerd/Baxter) United States Environmental Protection Agency Superfund site. The site, located between the cities of Brainerd and Baxter, was the location of a Burlington Northern Railroad tie treatment plant. Wastewater generated from the wood-treating process was sent to two shallow, unlined ponds. This created a sludge which contaminated both the underlying soils and the groundwater with creosote and polynuclear aromatic hydrocarbons (PAHs).

All content from Kiddle encyclopedia articles (including the article images and facts) can be freely used under Attribution-ShareAlike license, unless stated otherwise. Cite this article:
Crow Wing County, Minnesota Facts for Kids. Kiddle Encyclopedia.