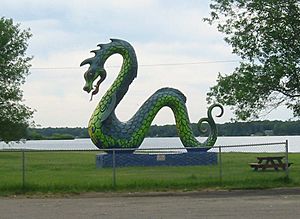 This serpent, on the edge of Serpent Lake, welcomes visitors to Crosby, Minnesota.

Crosby is a city in Crow Wing County, Minnesota, United States. The population was 2,386 at the 2010 census. It is part of the Brainerd Micropolitan Statistical Area. Crosby is adjacent to its twin city of Ironton. It is one of the cities in the Cuyuna iron range.

Crosby was a town that was built for the sole purpose of mining. It was named for George H. Crosby, a businessperson in the mining industry.

Crosby was the location of the worst mining disaster in Minnesota, the Milford Mine disaster. On February 5, 1924, a new tunnel was blasted too close to nearby Foley Lake, and water rushed in, killing 41 miners.

In the 1932 local elections, the voters of Crosby elected Karl Emil Nygard as President of the Village Council and thus became the first city in the United States to have a Communist mayor.

In August 1957, Dr. David G. Simons, a 35-year-old Air Force major, climbed to nearly 102,000 feet (31,000 m) above the Earth as part of Project Manhigh. The flight, which was launched from the 400-foot-deep (120 m) Portsmouth Mine Pit Lake in Crosby, helped the country take its fledgling steps into space exploration. Simons returned to Crosby in 2007 to mark the anniversary of the Man High project.

There were 1,065 households of which 27.5% had children under the age of 18 living with them, 32.3% were married couples living together, 13.8% had a female householder with no husband present, 5.7% had a male householder with no wife present, and 48.2% were non-families. 42.3% of all households were made up of individuals and 22.8% had someone living alone who was 65 years of age or older. The average household size was 2.13 and the average family size was 2.88.

All content from Kiddle encyclopedia articles (including the article images and facts) can be freely used under Attribution-ShareAlike license, unless stated otherwise. Cite this article:
Crosby, Minnesota Facts for Kids. Kiddle Encyclopedia.