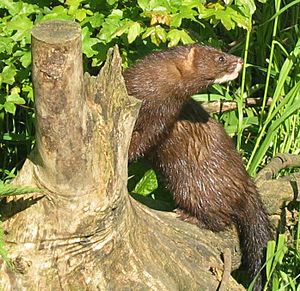 Mink are dark-colored, semiaquatic, carnivorous mammals of the genera Neovison and Mustela, and part of the family Mustelidae, which also includes weasels, otters and ferrets. There are two extant species referred to as "mink": the American mink and the European mink. The extinct sea mink is related to the American mink, but was much larger.

The American mink's fur has been highly prized for use in clothing, with hunting giving way to farming. Their treatment on fur farms has been a focus of animal rights and animal welfare activism. American mink have established populations in Europe (including Great Britain) and South America, after being released from mink farms by animal rights activists, or otherwise escaping from captivity. In the UK, under the Wildlife & Countryside Act 1981, it is illegal to release mink into the wild. In some countries, any live mink caught in traps must be humanely killed.

Mink oil is used in some medical products and cosmetics, as well as to treat, preserve and waterproof leather. 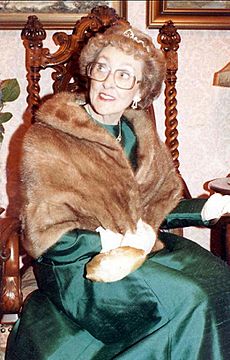 A mink's rich glossy coat in its wild state is brown and looks silky. Farm-bred mink can vary from white to almost black, which is reflected in the British wild mink. Their pelage is deep, rich brown, with or without white spots on the underparts, and consists of a slick, dense underfur overlaid with dark, glossy, almost stiff guard hairs.

The breeding season is April to May. It takes 45 to 52 days after mating for birth to take place. A mink litter normally has 6 to 10 cubs (kittens).

The maximum lifespan of a mink is usually around ten years, but rarely exceeds three years in the wild. 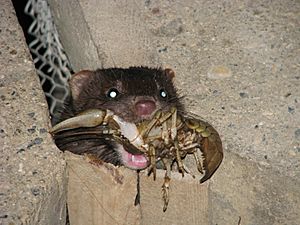 Mink prey on fish and other aquatic life, small mammals, birds, and eggs; adults may eat young mink. Mink raised on farms primarily eat expired cheese, eggs, fish, meat and poultry slaughterhouse byproducts, dog food, and turkey livers, as well as prepared commercial foods. A farm with 3,000 mink may use as much as two tons of food per day.

Great horned owls, bobcats, foxes, coyotes, wolves, and humans are all natural predators of mink. Mink are often hunted to protect the fish population in lakes and rivers, but are becoming endangered because of this. They are trapped for their fur (though the majority of mink fur on the market comes from fur farms.).

Mink like to live near water and are seldom found far from riverbanks, lakes and marshes. Even when roaming, they tend to follow streams and ditches. Sometimes they leave the water altogether for a few hundred meters, especially when looking for rabbits, one of their favorite foods. In some places, particularly in Scotland and in Iceland, where they have become a problem, they live along the seashore. Sometimes they live in towns, if suitable water is available. Mink may be present at all hours, even when people are nearby.

Mink are very territorial animals. A male mink will not tolerate another male within his territory, but appears to be less aggressive towards females. Generally, the territories of both male and female animals are separate, but a female's territory may sometimes overlap with that of a male. Very occasionally, it may be totally within a male's.

The territories, which tend to be long and narrow, stretch along river banks, or around the edges of lakes or marshes. Territory sizes vary, but they can be several miles long. Female territories are smaller than those of males.

Each territory has one or two central areas (core areas) where the mink spends most of its time. The core area is usually associated with a good food supply, such as a pool rich in fish, or a good rabbit warren. The mink may stay in its core area, which can be quite small, for several days at a time, but it also makes excursions to the ends of its territory. These excursions seem to be associated with the defense of the territory against intruders. The mink likely checks for any signs of a strange mink and leaves droppings (scat) redolent of its personal scent to reinforce its territorial rights.

Recently, a method ("minkenry") has been developed to use a trained mink (usually together with a dog) to kill pest animals such as rats. From available sources, the mink used seem to be black or nearly black ("mahogany") or white, from fur farms, and not wild-colored.

Minks are among the animals that can be infected with the coronavirus. Transmission of the virus from minks to humans was first documented in the Netherlands by way of genetic tracing, which prompted the government to bring forward to the end of 2020 a ban on mink farming scheduled to go into effect in 2024. The U.S. Department of Agriculture (USDA) confirmed that cases of minks infected with COVID-19 had been documented in Utah in August 2020.

All content from Kiddle encyclopedia articles (including the article images and facts) can be freely used under Attribution-ShareAlike license, unless stated otherwise. Cite this article:
Mink Facts for Kids. Kiddle Encyclopedia.