Wahpeton ( WAH-pə-tən) is a city in Richland County, in southeastern North Dakota, United States. It is located along the Bois de Sioux River at its confluence with the Otter Tail River, forming the Red River of the North. Wahpeton is the county seat of Richland County. The U.S. Census Bureau estimated the city's 2015 population was 7,899.

Wahpeton was founded in 1869 and is the principal city of the Wahpeton Micropolitan Statistical Area, which includes all of Richland County, North Dakota and Wilkin County, Minnesota. Wahpeton's twin city is Breckenridge, Minnesota, located to the east on the other side of the river. The Bois de Sioux River and the Otter Tail River join at Wahpeton and Breckenridge to form the Red River of the North.

The North Dakota State College of Science is located in Wahpeton. The local newspaper is the Wahpeton Daily News. 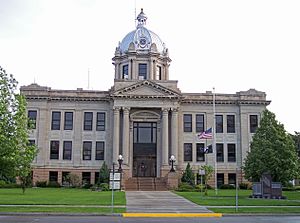 The Richland County Courthouse in Wahpeton, 2007

The first European explorer in the area was Jonathan Carver in 1767. He explored and mapped the Northwest at the request of Major Robert Rogers, commander of Fort Michilimackinac. This British fort at Mackinaw City, Michigan, protected the passage between Lake Michigan and Lake Huron of the Great Lakes. In 1763 the British had extended their reach in Canada after defeating the French in the Seven Years' War.

Carver's mission was to find the Northwest Passage, the imagined waterway to the Orient which Rogers (and many other explorers of the time) believed existed. Carver could not find what does not exist. His record of exploration helped attract fur traders and other explorers to this territory.

More than one hundred years after the Carver expedition, a United States Government surveying party passed through the Wahpeton area. With the Civil War over, the government wanted to encourage development in the West. J. W. Blanding, a member of the expedition, was so impressed by the fertile river valley that he returned to his Wisconsin home determined to move his family and belongings to the Dakota Territory. Blanding so influenced other Wisconsin settlers that many of them had arrived and homesteaded in the Wahpeton area before Blanding arranged his return.

The first settler was Morgan T. Rich. His plow turned the first furrow of rich black bottomland in 1869. When other settlers arrived, they formed a tiny community and named it Richville, commemorating both its founder and the fertile quality of the soil.

In 1871, a US post office was opened. At the same time, the town's name was changed to Chahinkapa, a Lakota Sioux word meaning "the end of the woods". Two years later, the county was organized and named Chahinkapa County.

Later that year the county was renamed as Richland County and the town of Chahinkapa renamed as Wahpeton, an adaptation of the Dakota name of the local band of Dakota Indians, the Wakhpetonwan. The name in Dakota means "leaf dwellers." They adopted this name at an earlier time when they lived in the vicinity of Lake Mille Lacs, before they were displaced by the Ojibwa and pushed to the west.

Growth of the village of Wahpeton was quite slow during the first few years, but it increased rapidly in 1872 with the completion of a railroad line into Breckenridge, Minnesota, a tiny community just across the Bois de Sioux River. The St. Paul and Pacific Railway (now the Great Northern) had entered the region. The railroad generated a booming business in flatboat building in both communities. Flat boats could carry freight directly from the railroad downriver via the Red River of the North (which flowed North) to northern parts of the state and all the way to Winnipeg, Canada.

The railroad line attracted many more settlers to the area - both migrants from the Eastern United States and new immigrants. Germans, Bohemians, Scandinavians, and Native Americans moved to Richland County to file for homesteads. In 1874, Jacob Morvin and Joseph Sittarich opened the first retail store in the county in Wahpeton. By 1876 the traffic between Wahpeton and Breckenridge had grown past the capacity of the ferry. A bridge was built across the Bois de Sioux River connecting the two towns.

Another flurry of growth occurred in 1880 when the St. Paul, Minneapolis, and Manitoba Railroad crossed the river and pushed its tracks on toward the northwest. By 1883 the population of Wahpeton was estimated to be as high as 1,400 people.

In 1888, the Northern Light Electric Company (NLEC) was organized here. It made Wahpeton among the first cities in North Dakota to be electrified. In 1909, NLEC became the first customer of the newly founded Otter Tail Power Company. In 1913, the owner of NLEC, C. B. Kidder, sold his company to Otter Tail Power and became its first general manager. In 1927, Otter Tail Power built what was then its largest power plant at Wahpeton, naming it Kidder Station. The plant was removed in 1977; the site is now a park.

In 1889, the Red River Valley University was established in Wahpeton; it later was renamed as the North Dakota State College of Science.

In 1904, the United States Government established the Wahpeton Indian School (now called Circle of Nations School) for the education of Native American children from reservations and tribes in northern Minnesota, North Dakota, and northern South Dakota. It was an Indian boarding school established to assimilate the children to mainstream language, culture and religion. In most of such schools, children were required to use English rather than their native languages (which were many among these groups), dress in Euro-American style, and practice Christianity.

The Red River of the North forms one of the most fertile river valleys in the world. As it flows north to Canada, it forms the state boundary between North Dakota and Minnesota. Wahpeton is located near the river's head-waters at the confluence of the Bois de Sioux and .

This climatic region is typified by large seasonal temperature differences, with warm to hot (and often humid) summers and cold (sometimes severely cold) winters. According to the Köppen Climate Classification system, Wahpeton has a humid continental climate, abbreviated "Dfb" on climate maps.

Dakota Avenue in downtown Wahpeton in 2007

There were 3,151 households of which 26.8% had children under the age of 18 living with them, 40.7% were married couples living together, 9.2% had a female householder with no husband present, 4.6% had a male householder with no wife present, and 45.5% were non-families. 36.3% of all households were made up of individuals and 11.7% had someone living alone who was 65 years of age or older. The average household size was 2.17 and the average family size was 2.89.

There were 3,254 households out of which 30.4% had children under the age of 18 living with them, 45.3% were married couples living together, 8.5% had a female householder with no husband present, and 42.6% were non-families. 32.7% of all households were made up of individuals and 10.0% had someone living alone who was 65 years of age or older. The average household size was 2.28 and the average family size was 2.97.

The area attracts outdoorsmen and hunters, as it is located in the midst of the Central Flyway, thus providing excellent migratory waterfowl hunting.

The Bois de Sioux Golf Course is the only golf course in the United States with half the course in one state and half in another.

Near the golf course is Chahinkapa Park, which houses playgrounds, baseball, softball, and football fields, miniature golf, and tennis. During the summer the large swimming pool is also open. Chahinkapa Park is also home to Chahinkapa Zoo.

The Richland County Historical Society Museum features Native American artifacts and displays of pioneer life. Near Wahpeton is Fort Abercrombie and the Circus Monument, erected in memory of circus workers killed by lightning there in 1897. Circus performers hold a memorial service at the monument whenever they perform in the area.

The Carmelite Monastery, located in the bend of the Wild Rice River, is a few miles from Wahpeton.

On Thursday afternoons from June through October, the Twin Towns Gardeners' Market is held on the lawn of the Leach Public Library.

Other Wahpeton area attractions include "Wahpper" the World's Largest Catfish, located at Kidder Dam, and the Bagg Bonanza Farm, a 15-acre (61,000 m2) historic bonanza farm with farm buildings and machinery.

All content from Kiddle encyclopedia articles (including the article images and facts) can be freely used under Attribution-ShareAlike license, unless stated otherwise. Cite this article:
Wahpeton, North Dakota Facts for Kids. Kiddle Encyclopedia.