Washington County is a county located in the U.S. state of Iowa. As of the 2010 census, the population was 21,704. The county seat is Washington.

The first religious society organized by Reverend J.L. Kirkpatrick, a Methodist reverend was created in 1839. The first newspaper was established in 1853; lasting only two years before crumbling. The very next year another newspaper was created, which is still viable today. The major waterways through Washington County are the Skunk and English Rivers and the Crooked Creek. Timber is found in abundance around these bodies of waters which helps in the major business of lumber. Soon after the year 1855, a bank was started in the city of Washington and other institutions followed soon after. No major increase in population happened until the year 1858 when the Mississippi and Missouri Railroad was finished through Washington. 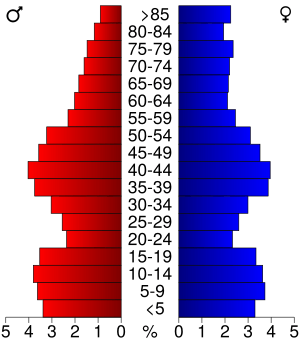 The population ranking of the following table is based on the 2010 census of Washington County.

All content from Kiddle encyclopedia articles (including the article images and facts) can be freely used under Attribution-ShareAlike license, unless stated otherwise. Cite this article:
Washington County, Iowa Facts for Kids. Kiddle Encyclopedia.