Cedar County is a county located in the U.S. state of Iowa. As of the 2020 census, the population was 18,505. Its county seat is Tipton. The county is named for the Cedar River, which runs through the county.

Cedar County is located between the Cedar Rapids, Quad Cities and Iowa City metropolitan areas, areas also known as the "Tri-Metro" county. It is the only Iowa county which shares the name of a tree.

Cedar County was the focus of the Iowa Cow War of 1931.

Cedar County was formed on December 21, 1837, from sections of Dubuque County. It was named for the Cedar River.

In 1840, the City of Tipton, the current county seat, was established.

Before the American Civil War, the area around West Branch was an active focal point of the Underground Railroad, a network for the freeing of slaves from the southern states.

The former US President Herbert Hoover (1874-1964) was born in West Branch in Cedar County.

The Cedar County Sheriff's House and Jail is believed to be the last jail and residence combination still in use when it closed in 2001. It was listed on the National Register of Historic Places in 2003. 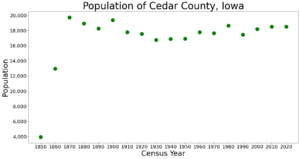 Population of Cedar County from US census data

The population ranking of the following table is based on the 2010 census of Cedar County.

All content from Kiddle encyclopedia articles (including the article images and facts) can be freely used under Attribution-ShareAlike license, unless stated otherwise. Cite this article:
Cedar County, Iowa Facts for Kids. Kiddle Encyclopedia.