Scott County is a county located in the U.S. state of Iowa. As of the 2010 census, the population was 165,224, making it the third-most populous county in Iowa. The county seat is Davenport. 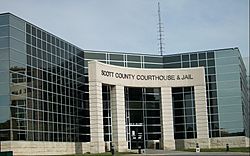 The first American settlement in the area now known as Scott County was Clark's Ferry or Clark's Landing (now Buffalo) in 1833. Other early towns included Davenport (now the county seat and largest city) and the town of Rockingham (which ceased to exist in 1847). The area was fully surveyed in 1837, and the county was established by the Wisconsin territorial legislature in that same year. Scott County is named for General Winfield Scott, who was the presiding officer at the signing of the peace treaty ending the Black Hawk War.

By 1900 the population of the county was 51,500, and by 1950 it was over 100,000. Scott County now comprises part of the Quad City region, which includes the cities of Davenport and Bettendorf (in Iowa) and Rock Island, Moline and East Moline (in Illinois).

The present Scott County Courthouse was completed in 1955 and expanded along with the jail in 2007. The old section of the Scott County Jail was listed on the National Register of Historic Places in 1983.

The US Census Bureau estimated Scott County's population at 170,385 in 2013, fourth fastest-growing out of Iowa’s 99 counties after Dallas County, Iowa, a Western suburb of Des Moines, Iowa, Johnson County, Iowa, Polk County, Iowa, and followed by Warren County, Iowa being the top five. 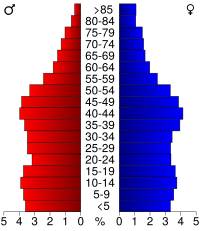 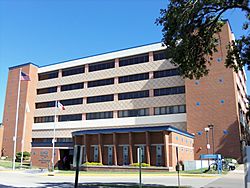 The population ranking of the following table is based on the 2010 census of Scott County.

All content from Kiddle encyclopedia articles (including the article images and facts) can be freely used under Attribution-ShareAlike license, unless stated otherwise. Cite this article:
Scott County, Iowa Facts for Kids. Kiddle Encyclopedia.